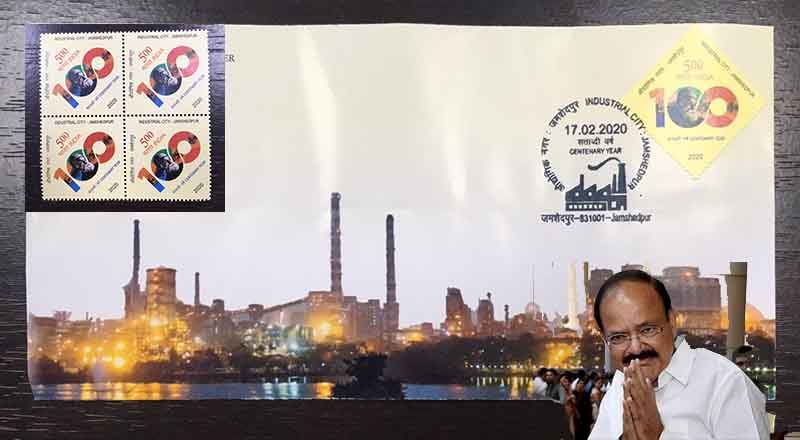 100 years of Jamshedpur named after Jamshedji Tata by Lord Chelmsford in 1919,today the Vice President M. Venkaiah Naidu has released a postage stamp to mark 100 years of the steel city at a function hosted by Tata Steel here on Monday.

Jamshedpur completed 100 years on January 2, 2019. Once known as Sakchi, a village in the princely state of Mayurbhanj, it was renamed Jamshedpur by then governor general and viceroy of India, Lord Chelmsford, on January 2, 1919 in honour of the founder of the Tata Group, J.N. Tata. Part one of a three-part series that documents the city’s multifaceted journey of growth through the eyes of its citizens and institutions.

The Vice President will release a commemorative stamp to mark 100 years of the city,” said Gudiya Kumari, senior post master, Bistupur General Post Office. “The stamp has been designed in consultation with the postal department and will be priced at Rs 5. It will be available at the philately unit of the Bistupur post office from the afternoon of February 17 (Monday).

East Singhbhum deputy commissioner (DC) Ravi Shankar Shukla said the Vice President will also release a coffee table book on Jamshedpur. As per the sources, Tata Steel’s corporate communication department revealed that the function at the XLRI auditorium would last for nearly an hour.