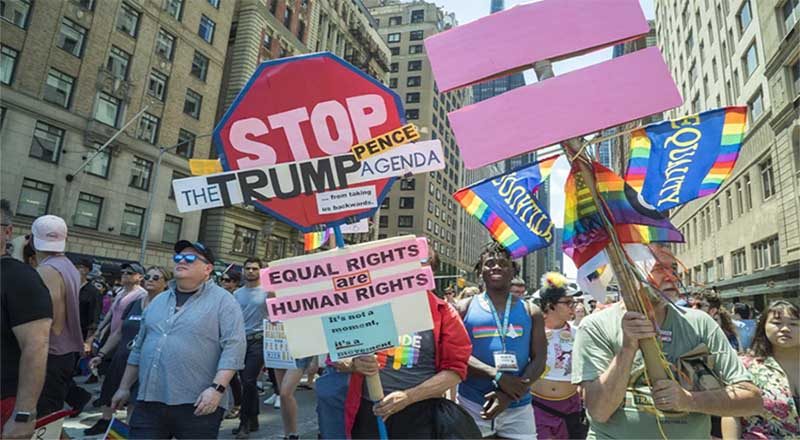 Today, the Human Rights Campaign (HRC), the nation’s largest lesbian, gay, bisexual, transgender and queer (LGBTQ) civil rights organization, announced that it submitted more than 10,000 public comments against the Trump-Pence administration’s proposed regulation that would gut nondiscrimination protections–including for LGBTQ people–by adding religious exemptions to President Obama’s 2014 executive order that prohibits discrimination in hiring by federal contractors on the basis of both sexual orientation and gender identity in addition to the original nondiscrimination protections outlined in Executive Order 11246.

“With this proposed regulation, the Trump-Pence administration is seeking to gut existing protections for LGBTQ people, women and religious minorities, and we cannot stand idly by,” said HRC President Alphonso David. “This regulation, which directly contradicts Trump’s earlier promise, is a broad and sweeping effort to implement a license to discriminate against people on the basis of their gender identity and sexual orientation. The American people recognize the danger of this proposal, which is why more than 10,000 people have submitted public comments opposing this regulation in less than a month. Everyone deserves a workplace free from discrimination. The Trump-Pence administration needs to withdraw this proposed regulation and stop these attacks on LGBTQ people.”

In his first month in office, President Trump promised to maintain the Obama EO:

President Donald J. Trump is determined to protect the rights of all Americans, including the LGBTQ community. President Trump continues to be respectful and supportive of LGBTQ rights, just as he was throughout the election. The President is proud to have been the first-ever GOP nominee to mention the LGBTQ community in his nomination acceptance speech, pledging then to protect the community from violence and oppression. The executive order signed in 2014, which protects employees from anti-LGBTQ workplace discrimination while working for federal contractors, will remain intact at the direction of President Donald J. Trump.

In July 2014, President Obama signed an executive order amending EO 11246 to provide nondiscrimination protections to LGBTQ employees of federal contractors by prohibiting companies that contract with the federal government from discriminating in employment based on sexual orientation and gender identity.

Last month, the Department of Labor’s Office of Federal Contract Compliance Programs (OFCCP) announced a notice of proposed federal rulemaking that lays out OFCCP’s intention not to enforce nondiscrimination requirements if a contactor claims that it is acting in accord with religious tenets which will negatively impact LGBTQ people, women and religious minorities. The proposal cherry picks federal court decisions, relies upon language not contained in the majority opinions, and blatantly changes the context and meaning of case law to justify the changes to existing regulations.

The Human Rights Campaign is America’s largest civil rights organization working to achieve equality for lesbian, gay, bisexual, transgender, and queer people. HRC envisions a world where LGBTQ people are embraced as full members of society at home, at work, and in every community.