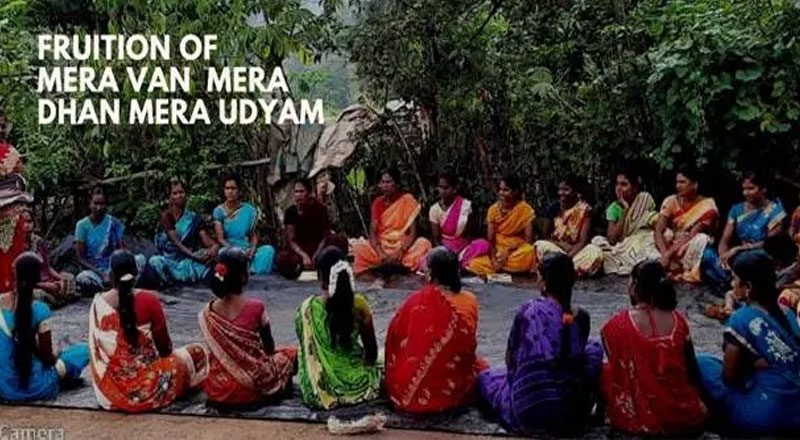 200 Van Dhan Producer Companies planned to be set up in 27 States during 2020-21 to 2025-26.
Jawadhu Hills Tribal Farmer Producer Company, a van dhan producer company, in less than 4 months, has sold processed products up to Rs 12 lakhs.
Keeping in line with the Hon’ble Prime Minister’s call for “Atmanirbhar Bharat” aligned to the slogan of “Be Vocal for Local Buy Tribal”, towards realizing the goal of “Sabka Saath, Sabka Vikas”, TRIFED has embarked upon an umbrella programme “Pradhan Mantri Janjatiya Vikas
In less than two years, 37,904 Van Dhan Self Help Group (VDSHGs), subsumed into 2275 Van Dhan Vikas Kendra Clusters (VDVKCs) of 300 forest dwellers each, have been sanctioned by TRIFED as of date. As per TRIFED, a typical Van Dhan Self Help Group (VDSHG) includes 20 tribal members. 15 such VDSHG form 1 Van Dhan Vikas Kendra cluster. The Van Dhan Vikas Kendra Clusters provide the VDSHGeconomies of scale, livelihood and market-linkages, as well as entrepreneurship opportunities to nearly 6.67 lakh Tribal forest gatherers in 23 states and 2 UTs.
TRIFED is also expanding the Skills Development and Micro entrepreneurship programme, together with the Tribal Livelihoods program. Convergences with various Ministries and Departments such as Ministry of Rural Development (MoRD), Ministry of Small and Medium Enterprises (MSME), Ministry of Food Processing Industries (MoFPI), Ministry of AYUSH have been initiated by TRIFED all with the aim of improving sustainable livelihoods and income opportunities for these tribals.

With Ministry of Agriculture & Family Welfare, TRIFED will work towards the formation of 14 Honey FPOs in 8 States such as Chhattisgarh, Gujarat, Himachal Pradesh, Uttarakhand, Karnataka, Tamil Nadu, Andhra Pradesh and Odisha.