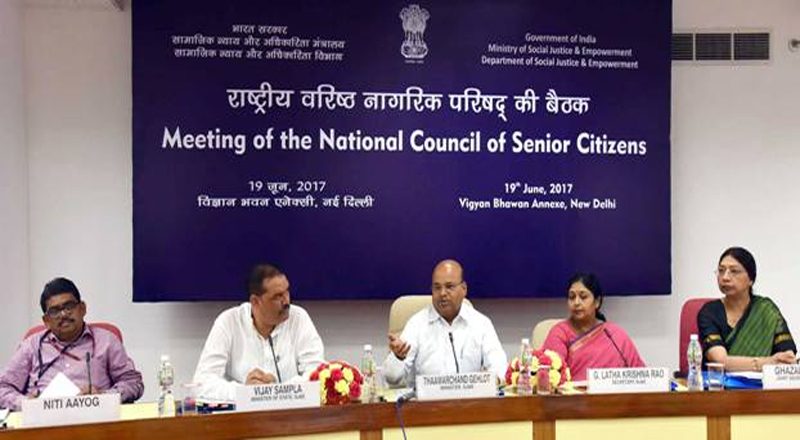 The National Council of Senior Citizens had its first meeting on 30th August, 2016.

The Minister for Social Justice and Empowerment is the Chairman and Minister of State (Social Justice and Empowerment) is the Vice-Chairman of the Council. The members of the Council includes Secretary (SJ&E), Joint Secretary (Social Defence), related central ministries such as Finance, Rural Development, Home Affairs, Law and Justice, Human Resource Development etc., National Commissions like NHRC, NCW etc., State Governments (on rotation), Oldest member of the Lok Sabha, Oldest member of the Rajya Sabha, along with representatives of Senior Citizens Associations, Pensioners’ Associations, eminent senior citizens working on issues related to senior citizens etc.

Addressing the occasion, Shri Thaawarchand Gehlot informed that Rastriya Vayoshri Yojana for free of cost distribution of Physical Aids and Assisted- Living Devices to senior citizens belonging to BPL category was launched by the Ministry of Social Justice and Empowerment which aims at providing senior citizens suffering from age related disabilities/infirmities, such assisted living devises which can restore near normalcy in their bodily functions overcoming the disability/infirmity manifested. The scheme is being implemented through ALIMCO, a PSU under the Ministry. The national launch of the scheme was done on 1st April 2017 at Nellore, Andhra Pradesh.

He also dwelt upon Scheme of Integrated Programme for Older Persons (IPOP) which is being implemented since 1992 and was revised in 2008. Subsequently, the cost norms of various components of the scheme were revised with effect from 01.04.2015.

The Minister said that at present, there is no central legislation or executive order prescribing minimum standards for the services facilities to be made available in Old Age. “Homes across sectors, are either run by private, Central or State Government/ UT. As a result, it has been observed that there are widespread disparities in the services offered and facilities available in various Old Age Homes. Therefore, it has been considered desirable that certain standards be evolved and prescribed for the Old Age Home, touching all facets of their functioning from infrastructure to facilities to manpower etc. so that a senior citizens getting admitted to the home could legitimately expect certain level of standardized service. Action for evolving the standards and method of its statutory prescription is underway.”

In pursuance of the National Policy for Older Persons (NPOP), a National Council for Older Persons (NCOP) was constituted in 1999 under the Chairpersonship of the Minister for Social Justice and Empowerment to oversee implementation of the Policy. The NCOP is the highest body to advise the Government in the formulation and implementation of policy and programmes for the aged. In order to have a definite structure as well as regional representation, the National Council for Older Persons (NCOP) has been reconstituted and renamed as National Council of Senior Citizens (NCSrC) vide a resolution dated 17th February, 2012 which was published in the Gazette of India on 22nd February, 2012.  The NCSrC advises Central and State Governments on the entire gamut of issues related to welfare of senior citizens and enhancement of their quality of life.