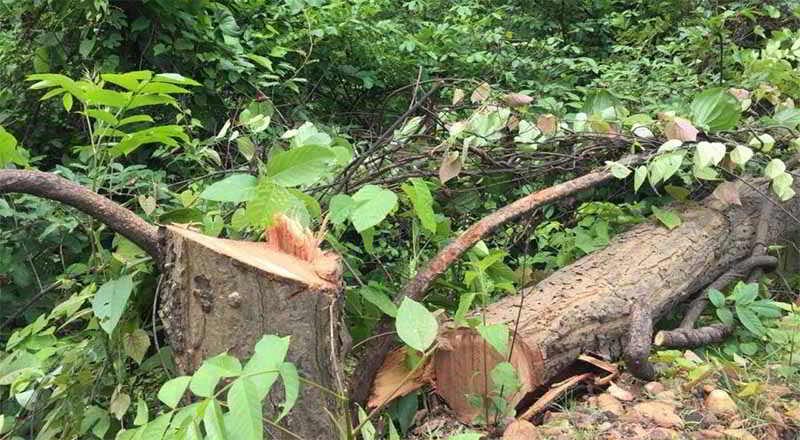 Around 40,000 trees have been cut in the Talabira village of Odisha’s Sambalpur district on December 9, 2019, to make way for a coal mine.

On March 28 this year, the Union Ministry of Environment, Forest and Climate Change (MoEF&CC) gave Stage II clearance to divert 1,038.187 hectares of forest land for an opencast coal mining project.

The project is being steered by the Neyveli Lignite Corporation (NLC) India Ltd in Jharsuguda and Sambalpur districts. According to the site inspection report of the Chief Conservator of Forest, Sambalpur, it involves the felling of 1,30,721 trees.

NLC had signed a mine development and operator contract with the Adani Group in 2018.

While the government has given the permission for the area to be diverted, the forest has been protected and conserved by forest dwellers in the Talabira village, along with five other hamlets in the area.

The village residents had formed an organisation called Talabira Gramya Jungle Committee and had appointed a guard, paying him three kilograms of rice per family for protecting the forest.

“We have protected this forest for more than 50 years. Around 3,000 people are dependent on this forest. which is around 970 hectares in area. Now, these trees are being cut down by the government for coal,” Hemant Kumar Raut, a resident of Khinda hamlet, said.

While the villager residents have protected the forest and are dependent on it, no titles under the Forest Rights Act, (FRA), 2006, have been filed here.

“We thought that this is our forest and no one can take it from us. We never thought that our forest could be taken away. Therefore, we never applied for rights under FRA,” Raut said.

He added that when he and his neighbours went to the district collector, they were told that the forest belonged to the government and the villagers had no right or say regarding what the government did with it.

“If there was a court case, then it’d be different, the collector told us,” Raut said.

The lack of legal recognition of the rights of the people over the forest has led to the diversion of the forest without taking cognisance of the people’s rights. This is despite the fact that under FRA, officials have a responsibility to create awareness among people.

“The FRA rules, 2012, require that the concerned officials raise awareness about the Act and its provisions. This is especially important if no claims are forthcoming and can enable the process of filing claims,” Kanchi Kohli, senior researcher, Namati Environmental Justice Programme, Centre for Policy Research, said.

According to Raut, no awareness campaign was carried out by the officials. Interestingly, since 2008-09, the Sambalpur and Jharsuguda forest departments have been given Rs74 lakh and Rs14 lakh respectively, for FRA implementation.

“A letter from each of the concerned Gram Sabhas, indicating that all formalities / processes under the FRA have been carried out, and that they have given their consent to the proposed diversion and the compensatory and ameliorative measures if any, having understood the purposes and details of proposed diversion,” the circular says.

“We have written letters to both collectors and the secretary, stating they had not given their consent, and their rejection document was forged. But no action has been taken on it so far,” Raut said.