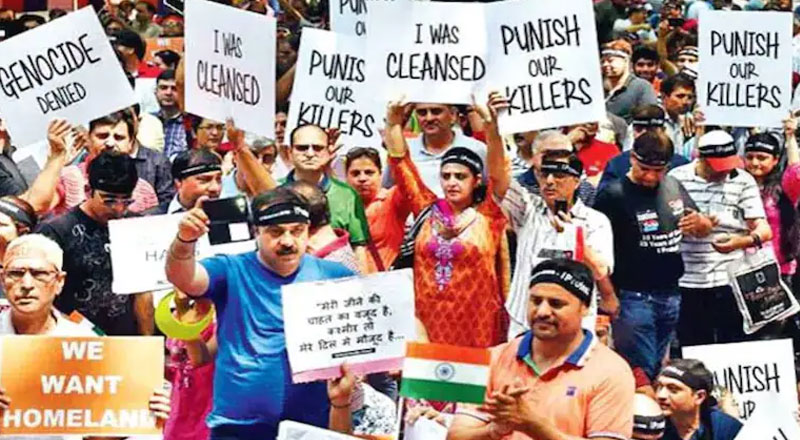 At least 64,827 Kashmiri Pandit families left the Kashmir valley in the early 1990s due to Pakistan-sponsored terrorism, the government said.

Pakistan-sponsored terrorism forced 64,827 Kashmiri Pandit families to leave the Kashmir valley in the early 1990s and settle in Jammu, Delhi, and some other parts of the country, government has said.

According to the annual report of the Ministry of Home Affairs (MHA) for 2020-21, as many as 14,091 civilians and 5,356 security force personnel lost their lives to militancy in Jammu and Kashmir between the 1990s, when militancy first reared its head in the valley, and 2020.

“Militancy in Jammu and Kashmir is intricately linked with infiltration of terrorists from across the border,” the report said.

Besides Kashmiri Pandits, militancy forced some Sikh and Muslim families too to migrate from Kashmir Valley to Jammu, Delhi, and other parts of the country, it said.

Nearly 1,054 families from the hilly areas of Jammu migrated to Jammu plains, it said.

To house these 6,000 Kashmiri migrant employees in the valley, construction of 6,000 transit accommodations at an outlay of Rs 920 crore has also been approved by the MHA.

Under the scheme, 1,025 flats have been completed or “substantially completed” and 1,488 are under construction.

The report said that a total of 2,546 terror incidents sponsored by Pakistan took place in Jammu and Kashmir from 2014 to 2020, in which 481 security personnel, 215 civilians, and 1,216 terrorists were killed.

There were 1,776 infiltration attempts from across the border to Jammu and Kashmir between 2014 and 2020, of which 685 were successful.

The annual report said under the PMDP-2015, financial assistance of Rs 5.50 lakh is also being disbursed to the 36,384 families which were displaced from Pakistan-Occupied Jammu and Kashmir (PoJK), Chhamb, and Niabat and had settled in Jammu and Kashmir.

The central government has approved a similar financial assistance for inclusion of those Displaced Persons (DP) families. Out of the 5,300 DP families of PoJK, 1,947 initially had opted to move outside the erstwhile state of Jammu and Kashmir, but later returned and settled there.

Financial assistance of Rs 5.5 lakh per family has also been approved by the government of India with an outlay of Rs 317.02 crore for 5,764 families of West Pakistan Refugees (WPRs), who had migrated from several areas of West Pakistan in the aftermath of the partition of 1947 and settled in different parts of the Jammu region, the report said.