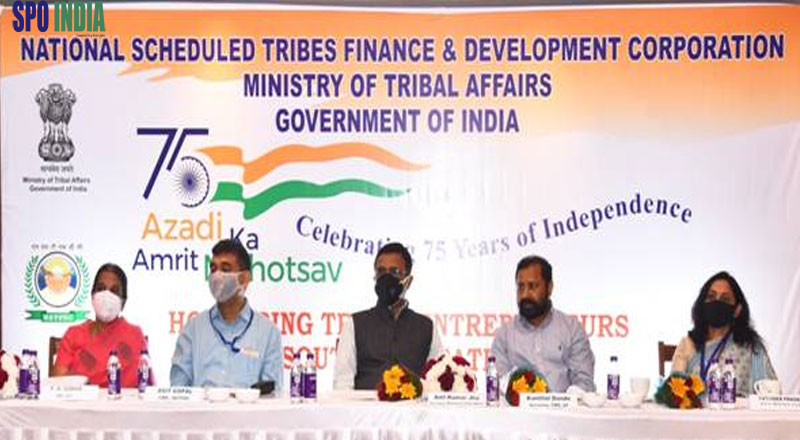 In a bid to promote entrepreneurship amongst the tribal community and encourage successful entrepreneurs, a grand event was organized by National Scheduled Tribes Finance and Development Corporation (NSTFDC) and Ministry of Tribal Affairs, Government of India to honour tribal entrepreneurs on 22nd November, 2021 at Visakhapatnam in association with TRICOR-Andhra Pradesh.

The event was a part of celebrations of Azadi Ka Amrit Mahotsav, 75thAnniversary of Indian Independence, an initiative of Government of India to celebrate and commemorate 75 years of progressive India and the glorious history of its people, culture and achievements. This observance is dedicated to the people of India who have not only been instrumental in bringing India thus far in its evolutionary journey but also hold within them the power and potential to translate Government of India s vision of Aatmanirbhar Bharat.

The programme marked the final day of the iconic week planned by the Ministry of Tribal Affairs, Govt. of India to commemorate “Janjatiya Gaurav Diwas” on 15th November, the birth anniversary of BhagwanBirsa Munda. As a part of this exuberant effort and in tune with the mandate of the Corporation i.e. to promote sustainable livelihood income generation activities through its various financing schemes designed for its target group, Ministry of Tribal Affairs and NSTFDC honoured86 ST Entrepreneurs from the across the southern states namely Andhra Pradesh, Karnataka, Kerala, Tamil Nadu, Telangana and Odisha. Among the felicitated entrepreneurs there were a substantial number of women entrepreneurs who have excelled in setting up of successful business ventures in different sectors.  The recipients were thrilled to get recognized in this grand event.

A small exhibition was also arranged wherein various products made by tribals were displayed.

Shri Anil Kumar Jha, Secretary to the Govt. of India, Ministry of Tribal Affairs graced the occasion as the Chief Guest. Shri KantilalDande, Secretary to the Government of Andhra Pradesh, Tribal Welfare Department was the special guest at this prestigious occasion. Shri Ani Jha, in his key note address urged the government, public, private to come forward to support the enterprises set up by tribals.  He also emphasized the potential of the traditional skills set of the tribals like healing practices, herbal medicines and natural remedies.

Shri Asit Gopal highlighted the various income generating schemes of NSTFDC including the flagship scheme namely Adivasi MahilaSashaktikaranYojana an exclusive scheme to empower the tribal women. He emphasized on the significance of encouraging the first generation entrepreneurs.

The representatives of various industrial forum like ASSOCHAM, DICCI, CII also spoke about their role in fostering tribal entrepreneurs. Mentors from the Going Online As Leaders (GOAL) Program of the Ministry of Tribal Affairs also spoke on scope of digital initiatives for development of STs.