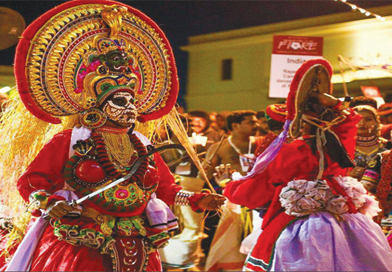 Sector in which the Project is covered:

Procedures adopted for selection of the implementation partner:

FOLKLAND, International centre for folklore and culture, an institution for the promotion of folk arts and culture was established under Indian Societies Act in 1989. The main philosophy guiding the institution is to delve deep into Kerala’s cultural roots and preserve its varied heritage for posterity. It strives to study the folksongs, dances and other performing arts of Kerala. Folkland has passed through various stages of growth especially in the field of performance, production, exhibition, documentation and research. Folkland organizes workshops, Seminars and festivals in Kerala and outside.

In brief, the procedure adopted as follows – the issue was identified and the literature involved with it was reviewed. Proper research was done about the NGO and its implementing persons to take a call.

After that, Dorf Ketal had an interaction with FOLKLAND about the issues and invited a project proposal from them with all of their legal documents and annual reports. The NGO has been found to be having a responsible governance and financial sustainability with credibility.

After assessing the proposal and cost implication, Dorf Ketal paid a visit to the project site to do the due diligence and to understand the issue in details. Thereafter, the report was submitted to its CSR Committee for their approval.

Project Duration: The duration of the project shall be 3 years in total (as the optimum result can be obtained in the long run).

The questionnaire consisted of 25 questions prepared in the vernacular language as the sample.

The project team has done an extensive review of the available literature on the art forms. In the case of Kathakali, it was identified that the present approach, understanding and handling the ancient cultural assets have totally changed in the present modern society. One of the basic causes of this is the practical factors like present lifestyle, living in the metropolitan atmosphere that is entirely different from the earlier life pattern. These days’ performances, which once lasted up to eight hours in order to tell the entire religious story, have been reduced to around two hours to cater to modern audiences. Although foreign tourists in Kerala pay up to Rs. 30,000- Rs. 50,000 ($430-$720; £300-£500) to watch a performance, junior dancers earn between 1,000-2000 rupees.

The project team had visited Guru Sadanam Balakrishnan at Kannur and had a discussion about carrying out the project. The team has also distributed questionnaires to the artists and is awaiting their responses.

In order to collect information regarding the present status of Tholpavakoothu, few of our team members visited some Tholpavakoothu artists in Palakkad district. From interviewing them, the team has identified the following reasons behind the perilous situation of Tholpavakoothu –

Kooth artists are not getting enough income from the performances. Though they are putting huge amount of effort, they hardly get what they deserve. Tholpavakoothu demands by hearting thousands of verses, dedicated and continuous practice and often performers won’t be able to sleep for nights. The new generation is not willing to put in much effort as they won’t be able to make their living out of Tholpavakoothu. Also they need to learn Tamil and Sanskrit to be efficient koothu artists for which they don’t have time and patience. Tholpavakoothu is seasonal which happens for three months in a year.

Once the festivals end, there is no demand for kooth artists. So they remain jobless for the rest of the year. The influx of people who are willing to perform koothu for cheap wages is a major reason behind the pathetic condition of Tholpavakoothu. Because of the influence of media, there is a large drop in the number of viewers for Tholpavakoothu. Also there are only very less people to comprehend puppetry. Nowadays intense debates do not happen in puppetry and the ones done are for namesake.

Grounds for selection of beneficiaries:

Correct target cannot be measured as the art form is practised widely across the state. Nearly 2,00,000 people will be benefited through the project. The estimated number of people going to get benefited from the project is given below