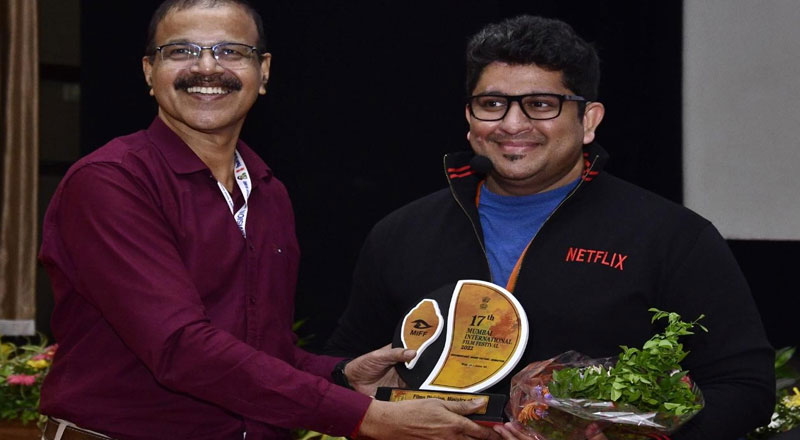 Scoring music is like portraying emotions. A great composer can make you feel the emotions even before watching the whole content, said the internationally-acclaimed music composer Ramprasad Sundar at a #MIFF workshop. “Music is an inherent part of film. It’s there from the beginning to the end.  So a filmmaker should not introduce music in the midst or in the post-production phase, rather it should be on board from the very beginning”, he added.

The workshop on the theme, ‘Scoring for Short-films & Documentaries’ was organized on the sidelines of 17th Mumbai International Film Festival today.

While addressing the film buffs, Ramprasad said, Music has been with us before films, TV and Theatre. Music by itself is a language and it should be used as a fundamental dialogue in filmmaking.

He further said in documentary, the music is scored in such a way that, when the narrator or the voice over starts, the music also flows simultaneously. This sets the emotion.

Deliberating about importance of sonic branding, the composer said, “It means identifying a brand or title just by listening the music. Choosing the right composer/artists, clear vision for the shows sonic palette from showrunner, date driven creative breakdowns, crewing up with the right music crew are basic principles to achieve a solid sonic palette.”

Music plays a crucial role in ensuring the impact of a documentary and short film. In this respect, Netflix has been immensely focused on bringing the best practices and international standards of scoring to India. Organised by Netflix, this detailed workshop elaborated on the process of scoring music for short films and documentaries. It opened up the world of music composition for participants by covering topics including styles and genres of scoring.

Ramprasad Sundar is an internationally-acclaimed music composer and sound designer. Following the completion of his Bachelor of Electronics from Chennai, he relocated to the US to pursue his graduation in Music Composition for Films and TV from New York University (NYU) and Video Symphony for Music for AR, VR, and Video Games in Los Angeles. As a musical composer and sound designer, he has collaborated with Remote Control Productions (Hans Zimmer), Cutting Edge Group, Audyssey, Output Inc., Native Instruments and Apple, Inc among numerous others. He recently joined the global streaming giant Netflix where he has taken over as the lead for India’s Music Creative and Production vertical, supporting their ventures into producing India-based series, films and non-fiction content.