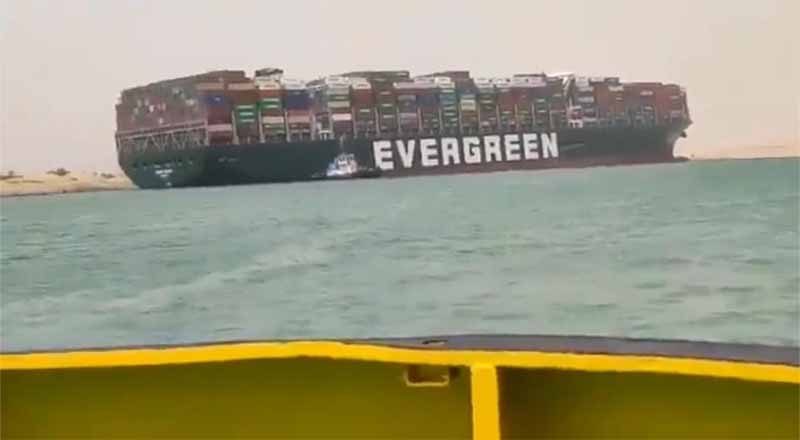 The current state of Suez Canal in a news channel. You can fathom the problem in hand for the authorities once you see the size of the ship. It’s taxing to even grasp how big this ship is. About a quarter mile long (400 meters) and weighing in at 200,000 metric tons, its sheer size is overwhelming the efforts to dig it out. It can carry 20,000 containers.

Around 18,829 ships passed through the canal carrying around 1.17 billion tonnes of cargo. Experts says, it may take weeks for normal navigation to be restored.

The wait is over at the Suez Canal. Putting an end to the six-day blockage, the operations in Suez Canal may restart by the end of the day and 369 ships that are stuck on both sides of the canal will be cleared as soon as possible. The container-ship ever given is re-floating.

Ever Given, which is operated by Evergreen Marine – a Taiwanese company – was jammed diagonally across a southern section of the canal in high winds more than six days ago. The incident had halting shipping traffic on one of the world’s busiest waterways.

Egyptian authorities had been working non-stop to refloat the ship using tug boats, sand dredges and with the help of salvage companies. SCA had lined up a detailed plan to clear the traffic jam by clearing vessels stuck at Great Bitter Lake, Port Said and Suez Port on a ‘first-come-first-serve’ basis.

Within five hours’ time, the container ship will be completely floated. We expect to start operations in Suez Canal by the end of the day (March 29),” said a senior official of Wilhelmsen Ships Service that manages transit operations in Suez Canal. He added that on both sides of the canal, ships carrying various cargoes including containers, chemicals, crude, and livestock are stuck now.

It a classic case study for many, no matter it’s subject on international trade. It’s about safety, wellness and matters related to this. A single vessel impact economy

Nearly 250 vessels struck up on their voyage via Suez canal.now commodties can reach its destinations well. Finally, Pandemic in Suez is over.

Osama Rabie, head of the Suez Canal Authority (SCA), had told the media that once the ship is withdrawn, SCA will resume navigation directly.