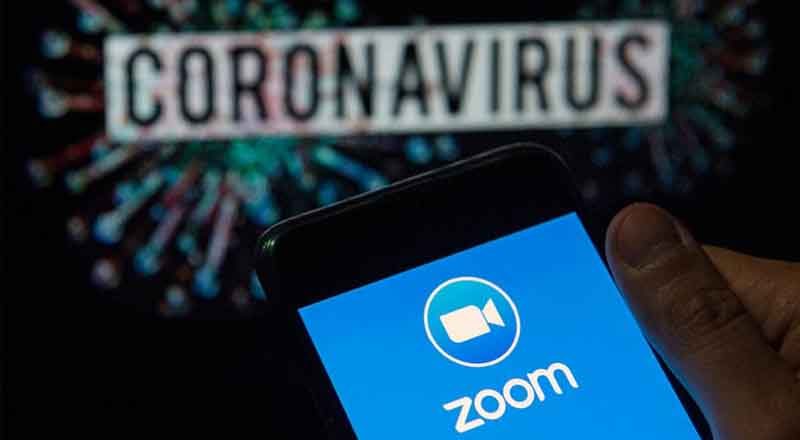 Millions of professionals in India are working from home after the imposition of a 21-day nationwide lockdown from March 25 to contain the spread of the COVID-19 pandemic.

The user base of Zoom has increased with the COVID-19 outbreak . The Zoom ,a Videoconferencing software company provides its customers with a cloud-based communication platform that can be used for audio and video conferencing, online meetings, as well as chat and collaboration via mobile, desktop, and telephone systems. While the Zoom app is highly vulnerable to cyber-attacks, says CERT-India.

The company has seen a drastic increase of new monthly active users since the start of 2020 as millions of employees are now working from home, adding roughly 2.22 million new ones this year alone while only 1.99 million were added through 2019.

Hundreds of new Zoom domains registered since the start of 2020, During the past few weeks, we have witnessed a major increase in new domain registrations with names including ‘Zoom’, which is one of the most common video communication platforms used around the world,” a Check Point Research report says. Check Point also noticed that other online collaborations platforms like including Google Classroom and Microsoft Teams are also being used by hackers as part of potential attempts to exploit their users.

“Malware infections would usually occur via phishing emails with malicious links or files. The actual malware used can change based on the attackers’ capabilities and goals.” A few days ago, Zoom also announced that it had decided to remove the Facebook SDK (Software Development Kit) from the Zoom iOS application after it was reported by Motherboard that it collected and sent device information to Facebook’s servers.  Insecure usage of the platform (Zoom) may allow cyber criminals to access sensitive information such as meeting details and conversations.

“The information collected by the Facebook SDK did not include information and activities related to meetings such as attendees, names, notes, etc., but rather included information about devices such as the mobile OS type and version, the device time zone, device OS, device model and carrier, screen size, processor cores, and disk space,” Zoom said.

Computer Emergency Response Team of India, the national cyber-security agency, on Thursday cautioned against the cyber vulnerability of the popular video conferencing app ”Zoom”, used by tens of thousands of professionals who are working from home in the country due to the COVID-19 pandemic, and issued an advisory outlining the safety measures for both the operator and the users.

The CERT-In, the national agency to combat cyber-attacks and guarding the cyberspace, said the unguarded usage of the Zoom meeting app can be vulnerable to cyber-attacks, including leakage of sensitive office information to cybercriminals.

“Many organisations have allowed their staff to work from home to stop the spread of coronavirus disease (COVID-19). Online communication platforms such as Zoom, Microsoft Teams and Teams for Education, Slack, Cisco WebEx, etc. are being used for remote meetings and webinars,” the advisory said. “Insecure usage of the platform (Zoom) may allow cybercriminals to access sensitive information such as meeting details and conversations,” it said.

The Federal Bureau of Investigation (FBI) has released an article on defending against video-teleconferencing (VTC) hijacking (referred to as “Zoom-bombing” when attacks are to the Zoom VTC platform).  Many organizations and individuals are increasingly dependent on VTC platforms, such as Zoom and Microsoft Teams, to stay connected during the Coronavirus Disease 2019 (COVID-19) pandemic. The FBI has released this guidance in response to an increase in reports of VTC hijacking.

The Cybersecurity and Infrastructure Security Agency encourages users and administrators to review the FBI article as well as the following steps to improve VTC cybersecurity: