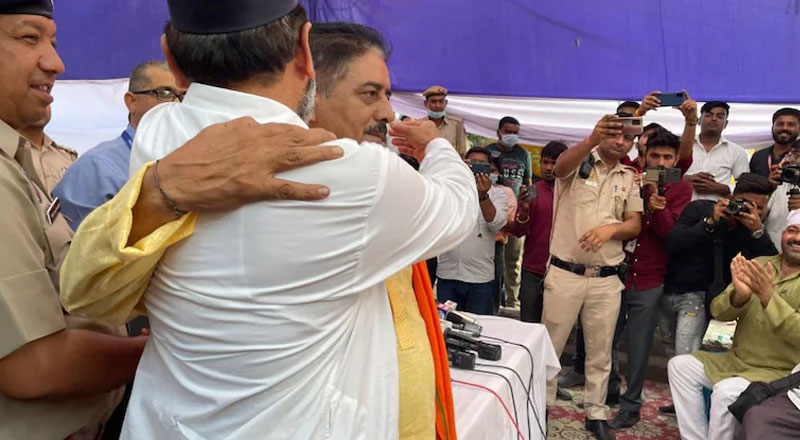 On Friday noon, the Muslim community members offered namaz at the Mosque whose ramp was bulldozed by the North MCD bulldozers. The residents remained out of bounds for the political visitors. However, in the evening, the tables turned. The Jahangirpuri residents declared restoration of peace in the locality.

It was a tense day for the residents of Jahangirpuri. At Kushal Chowk, along the devastated juice centre, personnel of the Delhi Police and the paramilitary forces remained on their toes. Drones flew overhead to keep a close eye on the neighbourhood which witnessed communal tensions and faced the demolition drive of North Delhi’s civic body in the past week.

This was the first Friday of Ramzan after the Hanuman Jayanti riots in Jahangirpuri. The local Muslim residents asked their children to stay home. Efforts have been made to ensure nothing untoward unfolds during the Friday prayers.

Sensing the situation, the Delhi Police’s senior officials visited the Jahangirpuri mosque. Outside the police barricades, delegations of different political parties, including the Samajwadi Party, Trinamool Congress and the Communist Party of India (CPI), tried to meet the local residents who had faced communal violence and the bulldozers.

However, by evening, the tables turned. The local residents – from both the Hindu and the Muslim communities – stepped out of the barricades and announced the restoration of peace in the neighbourhood.

“In the past week, we witnessed the worst turn of events. People from both communities committed blunders. Due to this, the neighbourhood has earned a bad name. It is impacting our businesses. Our clients are not ready to visit us in Jahangirpuri. A couple of them also disassociated from us,

Hindus and Muslims live side by side in Jahangirpuri. That brotherhood is still there. I assure you that whatever differences are there between the communities will end right here, today,” Khan said, addressing the members of the two communities.

“We have been living together for the past 30-40 years. We will douse the fire together. We don’t need netas here,” Tiwari said, adding, “When Tazias happen, Hindus will welcome it. And I would request our Muslim brothers that they can shower flowers on our processions.”

The locals appealed to the Delhi Police to allow them to open shops, reduce the police deployment and let normalcy return.

Notably, the Hindu and Muslim communities of Jahangirpuri have decided to take out a Tiranga Yatra on Sunday to send the message that all is peaceful in the area