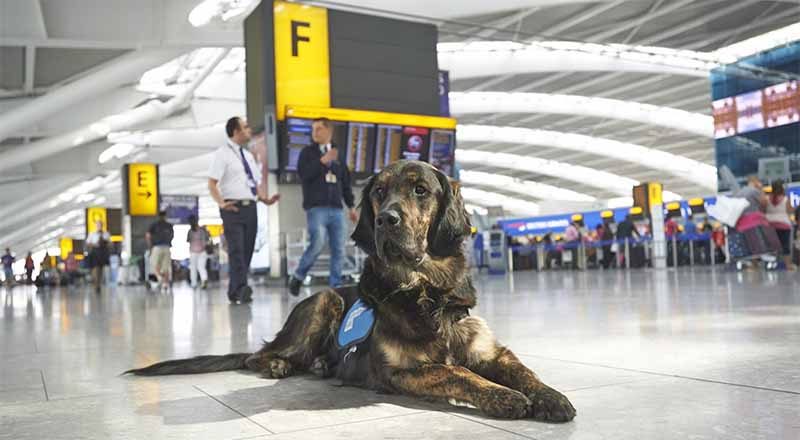 Sniffer dogs in the UK are these days on a  trial to check if they are specially trained airport sniffer dogs that could detect Covid-19 in travellers, even before symptoms appear.

Sniffer dogs are already a common sight in airports; but usually, they’re looking out for drugs, weapons or other contraband. Now the specially trained dogs have also been trained to detect infections and diseases, including cancer, malaria and Parkinson’s disease.

Professor Steve Lindsay, a public health entomologist at the UK’s Durham University says the first step is collecting human odour samples — both for people who’ve tested positive for Covid-19, and people who don’t have the disease.

They’re getting subjects to wear face masks for a few hours. Then the masks are passed on to the dogs, and used to help the animals distinguish between different scents.

It’s not just face masks that are being used — they’re also getting subjects to wear nylon socks.

“Which is a bit strange,” admits Lindsay. “But we’ve known from our previous experience that this is a really good way of collecting odours from people and it’s such an easy way to do it.”

Researchers from the London School of Hygiene and Tropical Medicine, in collaboration with charity Medical Detection Dogs and the UK’s Durham University, say respiratory diseases change body odour, and they reckon trained dogs will be able to pick up this shift on Covid sufferers.

The UK government has given the team more than £500,000 (over $600,000) to put towards the research. This preliminary trial has recruited six dogs, dubbed “The Super Six” — they’re all either Labradors or cocker spaniels.

Researchers believe that if the trial’s successful, it could be a way to kick-start the travel industry, which has ground to a halt since the start of the pandemic.

It could eliminate the need for quarantines for air travellers.

Researchers hope the first set of dogs could be deployed to key entry points, like airports, in the UK within the next six months. Each dog could potentially screen up to 250 people per hour.

“The basic idea is we can screen travellers innocently coming into this country who may be carrying Covid-19, detect those people and isolate them from the rest of the community,” says Lindsay.