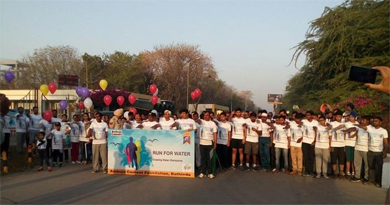 Ambuja Cement has celebrated the World Water Day 2018 across its operations with great enthusiasm and zeal, thereby creating awareness about the importance of water and advocating for the sustainable management of water resources.

The celebrations held under the theme ‘Nature for Water’ were marked with a series of activities – ‘Run for Water’ marathons, rallies, experience sharing sessions and awareness talks in which scores of people from Ambuja operations and nearby communities participated. The teams of Ambuja CSR arm Ambuja Cement Foundation (ACF), which is celebrating its Silver Jubilee year, too actively contributed to the events.

Ambuja Cement’s MD & CEO Ajay Kapur said, “Since inception, Ambuja Cement has exhibited a great commitment towards water resource management. Over the years, we have not only reduced the water footprint of our operations but also promoted responsible water management in partnership with various government and other local stakeholders. In fact, Ambuja Cement has adopted a True Value approach – encompassing people, planet, and profit –which has given us further impetus to meet our Group’s Sustainability Development Strategy objectives.”

Ambuja Cement’s mother plant Ambujanagar in Gujarat led the celebrations with a marathon in which over 500 people participated; while over 70 members of Ambuja’s women club visited the Bhekeshwar Dam – one of the biggest water harvesting projects developed by ACF in collaboration with its partners – to spread the word about the water harvesting initiatives and its benefits to the communities. An awareness session, quiz competition for employees, poster competition for children too saw enthusiastic participation.

Celebrations at Bathinda in Punjab and Bhatapara in Chhattisgarh too were marked with the marathons; poems were recited, water saving related videos played and skits performed. Operations in other locations including the Maratha Cement Works in Maharashtra and Darlaghat in Himachal Pradesh too widely observed this special day.