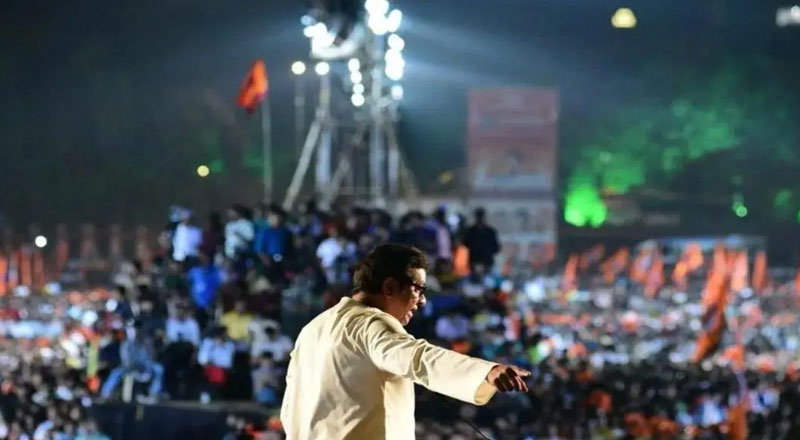 Shiv Sena leader Sanjay Raut on Tuesday termed May 4 a ‘black day for Hindus’ and alleged that the BJP is ‘using’ Raj Thackeray to create a rift among Hindus in the state.

“BJP is behind the loudspeaker row in Maharashtra. They’re using Raj Thackeray to create fissures among Hindus in the state,” said Sanjay Raut.

Hindus and temples are suffering because of the loudspeaker controversy, the Shiv Sena leader said.

“SC decision is the same for all. Now our temples also have to bear the brunt of it. It’s a black day for us Hindus that people couldn’t hear Aartis because of BJP’s politics in cahoots with Raj Thackeray”, said Sanjay Raut.

“It’s just not about loudspeakers in mosques, in Maharashtra, ‘Aartis’ are being conducted early morning and people often hear them through loudspeakers as not all of them can enter temple premises, but that can’t happen today, which’s unfortunate”, added Raut.

Raut further contended that Bal Thackeray and Veer Savarkar are the ones who taught Hindutva to the country and that Shiv Sena’s school of Hindutva is original.

Meanwhile, Maharashtra Navnirman Sena (MNS) chief Raj Thackeray on Wednesday said that playing Hanuman Chalisa outside mosques will continue till the time the government acts and addresses the issue in accordance with the Supreme Court guidelines on loudspeakers.

“As far as I know, there are over 1,140 mosques in Mumbai. Out of these, 135 mosques played azaan at 5 am violating the guidelines. We want peace in the state. I want to ask the police if you are taking action only against our workers. My point is that all illegal loudspeakers should be removed from mosques, until they are removed we will continue our agitation,” Raj Thackeray said while addressing a press briefing.

The row over loudspeakers started when the MNS chief on April 12 gave an ultimatum to the Maharashtra government to remove loudspeakers from mosques by May 3, failing which, he warned, MNS workers will play Hanuman Chalisa on loudspeakers.

A case was filed against Raj Thackeray on Tuesday when he appealed to people to play Hanuman Chalisa on loudspeakers in the areas where loudspeakers are used for ‘Azaan’.