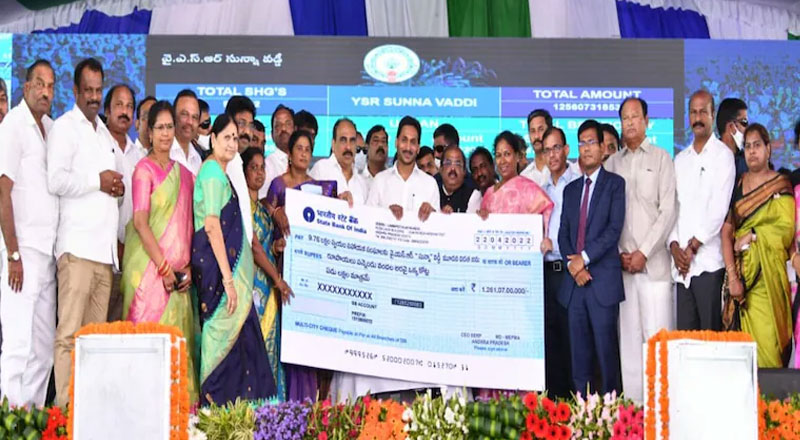 As of now, the government has credited Rs 3,615 crore under the Sunna Vaddi scheme, including Rs 1,261 crore which was released today.

Addressing the beneficiaries, the Chief Minister said, “The number of eligible women SHGs rose to 9.76 lakh from previous 8.71 lakh because of the efforts made by our government. Further, we negotiated with the banks to give loans without any collateral and persuaded banks to reduce the interest rates from 13.50% to 9.50% – 8.50%.”

CM Jagan noted that the government helped SHG women to receive over Rs 25,000 crore loans per year and facilitated a 99.27% loan recovery, the highest in the country.

Calling out the previous TDP government, Jagan said, “After assuring waiving off loans, they went back on their promise and scrapped Sunna Vaddi in October 2016. As a result, 18.36% of SHGs became non-performing Assets (NPAs) with high outstanding dues and most of them became defunct. But at the initiative of the YSR government, the NPAs have come down from 18.36% to 0.73%.”

To support the women who were in debt trap, soon after coming to power, the government introduced YSR Aasara to repay Rs 25,517 crore in four installments into the bank accounts of 78.76 lakh women belonging to 7.97 lakh SHGs

As of now, the government have deposited Rs 12,759 crore in two tranches, he added.