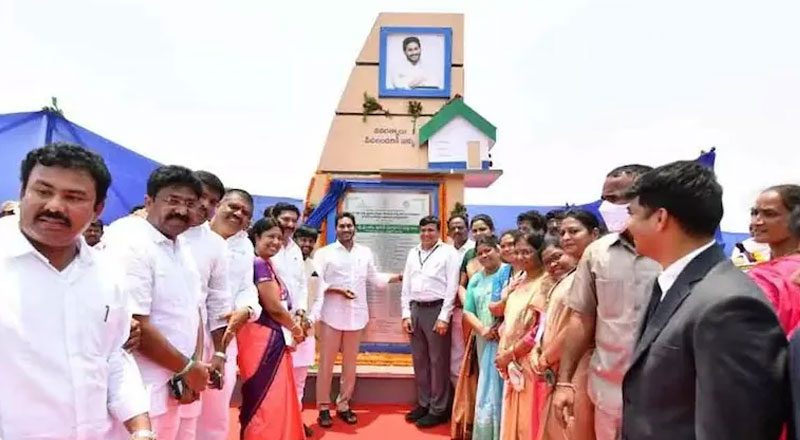 “Around 10,228 houses are being constructed in the colony of Pydivada Agraharam alone. We are giving each one a space with a value of Rs. 6 lakh. It is the government’s aim to reduce the financial burden on the beneficiaries who are constructing houses and give comfortable and affordable houses to every poor person in the state under the ‘Pedalandiki Illu’ scheme,” the CM said.

The CM further said, “Court proceedings have caused a 489-day delay in the issuance of house pattas. The cases have now been resolved in court. Regardless of the obstacles, we will provide homes for the poor.”

“Once the construction of the house is completed, each woman in a family would have an asset worth Rs 10 lakh,” he added.

The state government has decided that under Phase 2, each household will receive 90 bags of cement, 480 kg of iron, and 20 tonnes of free sand as a subsidy, he said.

For the construction of all 31 lakh houses, the government is purchasing 35 lakh tonnes of cement and 3.46 lakh tonnes of steel. Last year, the cost of housing was Rs 3,600 crore. In the current fiscal year, Rs 13,105 crore is being spent, said YS Jagan.

He added, “The colonies where the houses will be built and distributed will be known as YSR Jagananna Colony. The houses would all be built to the same model. Andhra Pradesh would set an example for the rest of the country by establishing all the social infrastructure in colonies, such as secretaries, health centres, schools, colleges, shopping malls, and parks.”

“The Jagananna government is the only government in the country that has given 30 lakh house deeds to the poor without a single rupee of corruption. If any beneficiary faces any problem in the construction of the houses, they can lodge complaints with the help of volunteers through their app,” the CM noted.

He also slammed the previous Telugu Desam Party (TDP) government, saying they duped the people and did not care about them, whereas the Yuvajana Sramika Rythu Congress Party (YSRCP) government is helping the poor more than ever.

“According to the National Building Code, the minimum floor area of a home is 221.6 square feet. The house given under the Jagananna housing scheme is 340 square feet. Chandrababu Naidu gave just 224 feet. This shows how the YSRCP government cares for the poor,” he added.