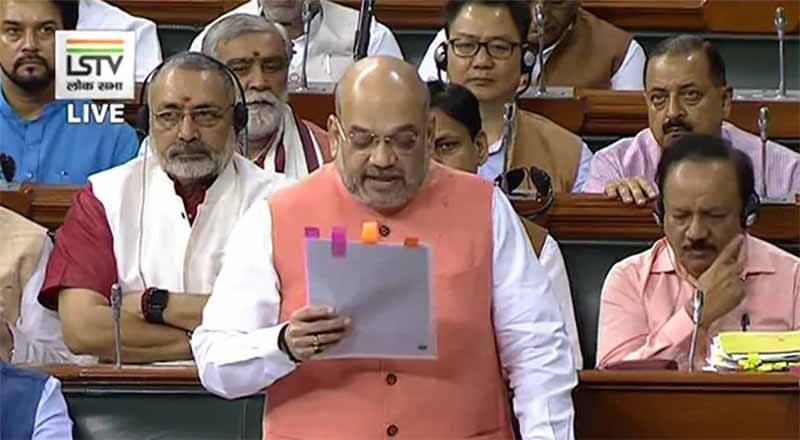 370 Lok Sabha members voted in favour of the bill and 70 voted against it. For the first time we are witnessing a state being turned into a Union Territory. The government had on Monday announced that special status to Jammu and Kashmir under Article 370 of the constitution has been removed by an order from President Ram Nath Kovind.

Congress’s Manish Tewari opposed the centre’s Kashmir move saying: “For the first time we are witnessing a state being turned into a Union Territory.”

The state of Jammu and Kashmir is under a lockdown and former chief ministers – Omar Abdullah and Mehbooba Mufti – were arrested on Monday soon after the two resolutions cleared Rajya Sabha. National Security Advisor Ajit Doval and Home Secretary Rajiv Gauba are in Jammu and Kashmir today to oversee the security measures.

In Box: Article 370 removed, anyone can buy land in Kashmir now.

The President’s Order is passed under Article 370(1): What does that mean?

In a nutshell, because of Article 370(1)(d) of the Indian Constitution, Monday’s Presidential Order cannot cause Article 370 and Article 1 to apply in a modified form to Jammu and Kashmir.

In Box: While the permanent residents of J&K stand to lose all special privileges including the right to own property and hold state government jobs, the revoking of Article 370 ends the age-old discrimination against women of the state who chose to marry outsiders

The announcement came after Prime Minister Narendra Modi held a meeting of his cabinet at his house this morning. Amit Shah also introduced a bill to bifurcate Jammu and Kashmir into two union territories, which was passed in the Rajya Sabha. Prepping for any trouble in the state after the announcement, the centre moved 8,000 paramilitary troops from different parts of the country to Kashmir, in addition to nearly 35,000 personnel moved in the past week.