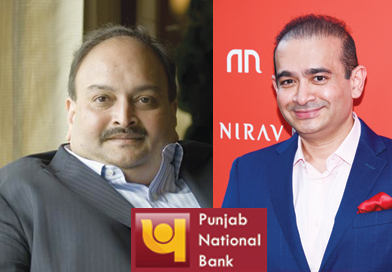 (Contd. from Feb 2018 Issue)
There seems to be no end to the bank fraud investigation case that is going on currently involving Nirav Modi and Mehul Choksi. While the probe might take some time given the magnitude of the case and the number of people involved in it, the latest reports say that the Serious Fraud Investigation Office (SFIO) of the Ministry of Corporate Affairs has summoned the ICICI Bank CEO Chanda Kochhar and Axis Bank MD Shikha Sharma in relation to the Mehul Choksi’s Gitanjali Gems fraud case.

BSE has also sought clarification from both Axis Bank and ICICI Bank on the news report. ICICI Bank led the 31-bank consortium that extended credit to the tune of Rs 5,280 crore to Mehul Choksi’s Gitanjali Group. ICICI Bank alone had given Rs 405 crore loan to Gitanjali Gems.

However, it should be noted that top bank executives are only being questioned for clarifications and not as accused in the loan fraud case. Meanwhile, the ICICI Bank has said its exposure to the Gitanjali Group is not the largest among the consortium lenders.

The SFIO’s Mumbai head while confirming about summoning both Kocchar and Sharma has stated that they have been summoned for giving the loan facility to Gitanjali Group. “Our intention is to get the information from these two banks. We would like to question both of them,” it said.

The SFIO also said that the PNB MD and CEO, Sunil Mehta, has been summoned. A slew of agencies, including the CBI and ministerial arms like the Enforcement Directorate as well as the SFIO are probing the scam. According to reports from PTI, V Srinivasan, Deputy Managing Director of Axis Bank was seen one day exiting the SFIO office in south Mumbai. The CBI had earlier detained Vipul Chitalia, the vice-president of Gitanjali Group of Companies, as a part of its probe into the multi-crore Punjab National Bank (PNB) fraud.

Chitalia was apprehended at Mumbai airport and brought to the Central Bureau of Investigation (CBI) office at the Bandra-Kurla Complex for questioning, but did not divulge any other details about Chitalia’s alleged role in the PNB fraud.

In the meantime, the National Company Law Tribunal (NCLT) issued orders restraining Nirav Modi, Mehul Choksi and 60 entities, including various individuals, companies and limited liability partnership firms, from selling their assets so that the government can recover funds siphoned off by them in the Rs 12,700 crore PNB fraud.

Saying that the bank was fully cooperating with the investigation agencies, the ICICI Bank said: “Our exposure to the Gitanjali group of companies is not the largest among lenders in the consortium.”

In another instance, RBI has slappted Rs. 58.9 crore fine on ICICI Bank for failure to meet disclosure norms on sale of securities.

Meanwhile Jeweller Mehul Choksi has refused to join a CBI probe in the USD 2 billion PNB scam and claimed that “untenable” allegations had resulted in “sudden closure” of his business and exposed him and his family to “threats” from former associates.

The agency had again asked him to join the investigation, on March 16, through an email dated March 13. The agency had summoned him for questioning in connection with first FIR in which Choksi is named as an accused along with his nephew Nirav Modi, Ami Modi, Nishal Modi. A separate FIR against him and his company Gitanjali group had also been registered by the agency.
In his two-page letter to the CBI dated March 16, Choksi mentioned about his medical condition, suspended passport, media trial to decline the agency’s communication asking him to join the probe.

“…till date, the Regional Passport Office has not communicated with me and my passport continues to remain suspended…I assure your good offices that I am not making any excuse, whatsoever to travel to India,” he said in the letter addressed to investigation officer of the case.

“I reiterate that I’m abroad and have earlier also responded to your notices. Surprisingly, the issues raised, the same has remained unaddressed, making my fear of safety rise to extreme levels,” he said.

The jeweller, who had left the country before Punjab National Bank approached the CBI with complaint against him and Nirav Modi, said the media continued to conduct a trial by itself blowing each and every issue out of proportion.

“…I had earlier expressed my apprehension and concern for my family’s and my safety. The threat to me and my family continues, and I’m still being threatened by individuals with whom I had business relationships. As there has been a complete and sudden closure of my business, my employees, customers, creditors etc have started to show animosity towards me,” he claimed.

Choksi claimed that he was neither a partner of Diamond R US, Stellar Diamond, Solar Exports, companies accused in the FIR, nor did he have any kind of association with them.

“I further inform that requiring me to join the investigation, though leaving me helpless and information-less, by various actions taken by multiple agencies is unfair. The manner in which the allegations have been exaggerated has left me completely defenceless,” he said.

Choksi said he was held up in his business abroad and working hard to resolves the issues it was facing due to the unnecessary closure of the business in India due to untenable allegations.
“…I am unable to travel to India due to my persisting health condition…I have been advised to not travel for a period of 4 to 6 months. The said situation still remains, thus I expected your agency shall consider on humanitarian grounds,” he said.

One of the biggest financial scams of the country surfaced when the companies of Nirav Modi and Mehul Choksi approached the PNB’s Brady Road branch, Mumbai, in January this year, seeking LoU for payments to suppliers. The official handling the case sought 100 per cent cash guarantee before any such letters could be issued to which the company officials said no such guarantee was sought in the past.

Nirav Modi, against whom PNB has filed a complaint was allegedly helped by a former bank employee, Gokulnath Shetty. He was a deputy general manager in the foreign-exchange department in one of its branches in Mumbai. Shetty allegedly issued several fake letters of undertaking (LoUs) from PNB without any collateral for Modi. The bank claims that for seven years the employees then bypassed the lender’s internal messaging system in order to avoid detection.

Modi had already left the country along with his family in the first week of January, before the alleged scam became public.

Central government agencies – the CBI and the Enforcement Directorate – have registered cases on the complaint by the bank, and launched nationwide searches on dozens of offices and residences of the alleged fraudsters. The bank has named Modi’s brother, his American wife Ami, and uncle Choksi besides some others in the FIR.

The CBI has alleged that firms controlled by Nirav Modi and Choksi obtained fraudulent LoUs and letters of credit (LCs), worth over 13,000 crore, from PNB in connivance with some officials of the bank.