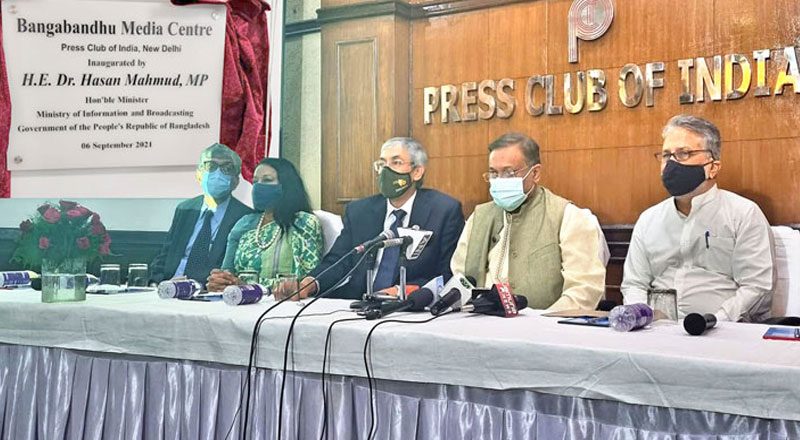 Bangladesh Information and Broadcasting Minister, Hasan Mahmud had on Monday inaugurated the Bangabandhu Media Centre at the Press Club of India (PCI) in Delhi.

The Media Centre is named after the country’s founding father Sheikh Mujibur Rahman. A life-size photo of Rahman was also unveiled in the presence of Minister Mahmud and Bangladesh high commissioner Muhammad Imran. It is for the first time that a media centre has been named after a foreign leader at any press club in India.

Speaking on this occasion, Dr. Mahmud said that such an initiative will strengthen the Indo-Bangladesh ties.

“Bilateral relations between both the countries have touched new heights under the leadership of Prime Minister Narendra Modi and Prime Minister Sheikh Hasina,” he said.

Remembering the contribution of Bangabandhu, Dr. Mahmud said that Sheikh Mujibur Rahman sacrificed his life for the freedom and the people of Bangladesh. He thanked India for playing a critical role in the liberation efforts of Bangladesh. “It would not have been possible to liberate Bangladesh without the help of India,” Mahmud said.

High Commissioner of Bangladesh in India, Muhammad Imran in his speech recalled that this is the 50th year of diplomatic relation between India and Bangladesh.