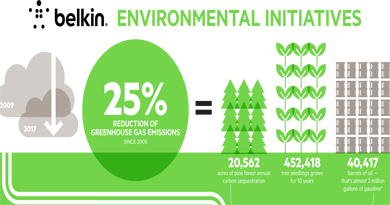 Ahead of the International Earth Day, Belkin has shared its concerns over the inefficient waste management scenario of India which is resulting in an alarming rise of solid waste generation per capita.

Incepted in 1983, Belkin is well known for creating products that make people’s lives better, easier and more fulfilling. It is one of the most active tech- companies in the world to participate and carry out activations related to sustainability of the planet Earth and preservation of its resources. The environmental initiatives undertaken by Belkin since 2009 have resulted in 25% reduction of Greenhouse emissions.

Additionally, Belkin also helps employees cut down their commuting carbon footprints by providing van pools and connecting commuters for carpooling opportunities. It has introduced a number of incentives to promote go green such as rideshare subsidies and preferential parking to its employees. It also provides cash incentives for using public transportation, carpooling, telecommuting, and off- schedules to reduce congestion during peak commuting hours.

Belkin has recognized the need of managing e-waste in India and finding mechanisms to contribute in the reduction of its adverse impact on planet Earth. The present efforts of Belkin are bringing a change in their surroundings each day.