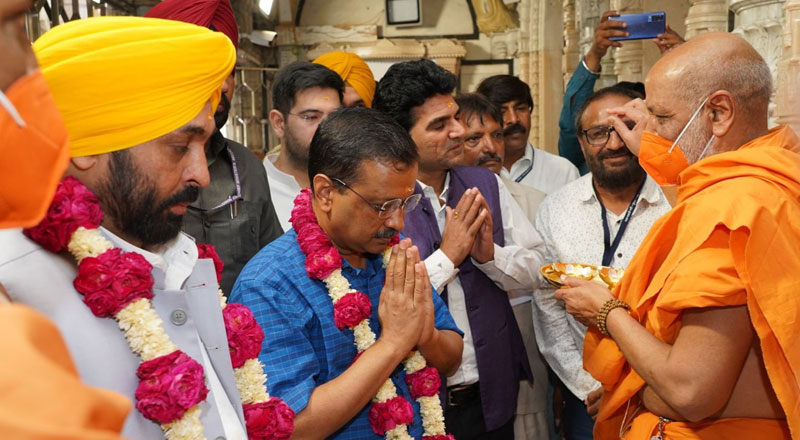 Representatives and dignitaries of the Sikh society of Gujarat called on Punjab Chief Minister Bhagwant Mann on Sunday,

after the latter’s visit to the Swaminarayan Temple in Gujarat’s Shahibaug with Aam Aadmi Party (AAP) national convenor Arvind Kejriwal.

According to the AAP’s recent tweet, both the leaders visited the temple to offer prayers for the country’s peace and prosperity.

Earlier on Saturday, following the Tiranga Yatra, both the leaders had visited Sabarmati Ashram in Ahmedabad, where they spun Charkha.

In the yatra, they urged the people of Gujarat to give one chance to his party in the forthcoming elections in the state. He further assured that his party will end the cycle of corruption in the state after coming to power

I don’t know how to do politics but I do know how to end corruption. We have finished corruption in Delhi. Today, if you go to any office in Delhi, you don’t have to pay a bribe,” said Kejriwal during Tiranga Yatra in Ahmedabad.

Similarly, Bhagwant Mann ended corruption in Punjab in mere 10 days of his governance. If you don’t believe me, ask any of your friends in Punjab. Today, all work gets done in Punjab be it license office, tehsildar office, within 10 minutes,” he added.

Speaking to people during the roadshow, Mann said, “Delhi and Punjab are sorted, now we are preparing for Gujarat.”
AAP’s official Twitter handle termed this roadshow as ‘AAP Gujarat Tiranga Yatra’.

During the roadshow, a tableau of Delhi’s world-famous Mohalla Clinic was displayed in the Ahmedabad roadshow.
The Gujarat Assembly elections are slated to be held this year.