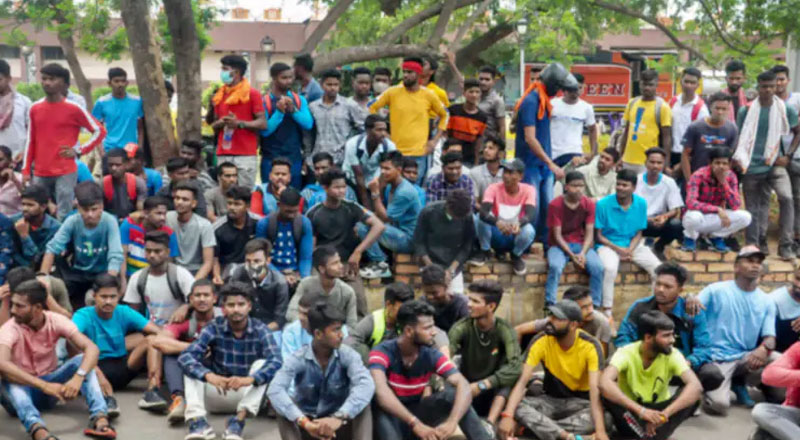 Amid the ongoing protests due to the Agnipath scheme, the Gautam Buddh Nagar police reiterated on Sunday that CrPC section 144 is imposed in the district and asked everyone to not engage in any activity which disrupts law and order.

As the outrage over the Agnipath scheme intensifies in several areas, the state government are taking steps to tighten security. The Gautam Buddh Nagar police on Sunday announced that CrPC section 144 has been imposed in the district and asked everyone to obey the law.ADVERTISING

According to the reports, the police have so far arrested as many as 250 people involved in the violence during protests against the Centre’s new scheme for recruitment of soldiers in the Army, Navy and Air Force.

The country has been witnessing protests against the government’s new ‘Agnipath’ military recruitment scheme since last week. Keeping this in mind, Bharat Bandh has been given by some groups.

As per PTI, Additional Deputy Commissioner (Law and Order) Ashutosh Dwivedi on Sunday said that miscreants had lured the aspirants of armed forces during the protests against the Agnipath scheme to disrupt law and order across the state.

“It has been learnt through social media that a call for ‘Bharat Bandh’ has been made by a section of people for June 20 in view of the Agnipath scheme and some anti-social elements in groups may to disrupt peace and even try marching towards Delhi,” he said.

Dwivedi further added, “It is to remind everyone that CrPC section 144 is already imposed on Gautam Buddh Nagar commissionerate. An FIR would be registered against any person found engaged in activities in violation of law and strict action would be taken against them.”

Amid the ongoing protests and violence, the members of the ex-servicemen’s welfare committee, Jewar, met police officials and submitted a memorandum on Sunday. They have demanded action against protesters of the Agnipath scheme.

Protests erupted across several states in the country after the centre announced its Agnipath scheme for the recruitment of soldiers between 17.5 and 21 years of age across the three services for a four-year period.