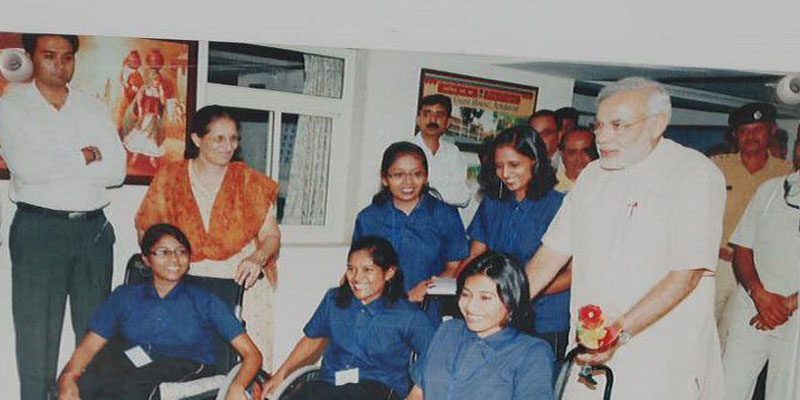 Prime Minister called up Bhavina following her final match against Zhou Ying on Sunday morning and congratulated her on winning the silver medal.

Bhavinaben Patel created history by winning India’s first silver medal in women’s singles class 4 table tennis today at Tokyo Paralympics. Winning a silver medal is nothing short of a surprise and a memorable gift to the nation on the occasion of National Sports Day 2021.

Union Minister for Youth Affairs and Sports Shri Anurag Thakur went back in history and recollected some cherished moments Prime Minister Shri Narendra Modi had shared with Bhavina. The Union Minister shared a photo from 2010 where Bhavina and her compatriot Sonalben Patel were felicitated by the then-Gujarat Chief Minister, Shri Narendra Modi. “Sonal and Bhavina were heading for the 2010 Delhi Commonwealth Games. CM Narendra Modi met and encouraged them to give their best,” Shri Thakur wrote on his Twitter.
Building a sports culture, supporting every sport and sportspersons has been a lifelong endeavour, which continues and bears its fruits today. Sportspersons’ Prime Minister!” the tweet further read. Prime Minister called up Bhavina following her final match against Zhou Ying on Sunday morning and congratulated her on winning the silver medal.

The 34-year-old Indian para-Table Tennis player, ranked 12th in the world in the Class 4 category, had a big mountain to climb against Ying in the final. She went down 0-3 to the World No 1, who now has six gold medals from four Paralympic Games. Bhavina had come up short against the Chinese in her opening group stage match as well. Nevertheless, the amount of upsets she caused right from the pre-quarters stage is noteworthy.

Bhavina, playing just her maiden Paralympic Games, won her round of 16 match against Brazil’s Joyce de Oliveira, a higher-ranked opponent, in straight games 3-0. Serbia’s Borislava Peric, Bhavina’s opponent in the QF, was a gold as well as a silver medalist at the 2016 Rio Paralympics. The Indian dominated her en-route a 3-0 victory as well. In semis, Bhavina defeated 2012 Paralympics gold medalist and 2016 Paralympics silver medalist Zhang Miao in a 3-2 thriller.

Bhavina has been given the utmost support as possible by the Government of India in terms of participation in international competitions, financial assistance towards procuring a TT Table, TT Robot ‘Butterfly – Amicus Prime’, worth Rs 2.85 lakh as well as an Ottobock Wheelchair worth Rs 2.74 Lakh.