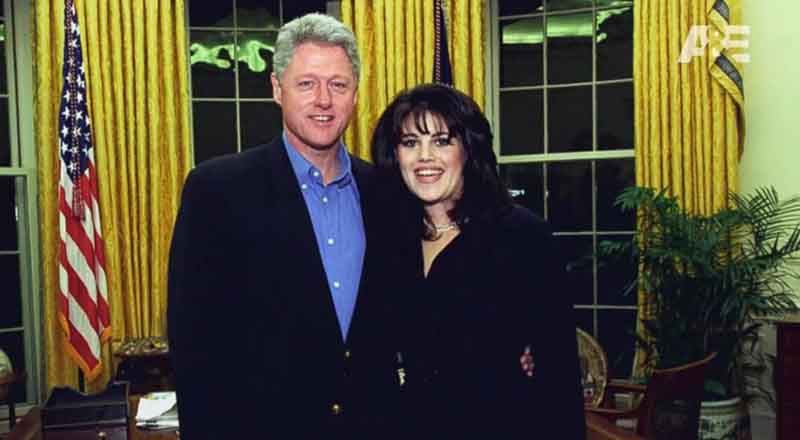 As per dailymail.co.uk/, I did it to manage my anxieties.’ Bill Clinton reveals in Hillary Hulu doc that he had oral sex with Monica Lewinsky to ease pressures of the job, feels ‘terrible’ scandal defined her life and confessing to Chelsea was the worst.

The former President suggests, in an explosive documentary seen by DailyMailTV,  that he had the fling with the ex-White House intern while he was in office because it helped with his own issues.

Bill reveals that at the time he met Lewinsky the pressure of the job made him feel like a boxer who had done 30 rounds and he looked at Lewinsky as ‘something that will take your mind off it for a while’.

The former First Lady candidly reveals that in the aftermath of the scandal the couple underwent ‘painful’ marriage counseling. She’s pictured at the New York City premiere of the documentary on Wednesday night . Hillary famously stood by her husband during his 1998 impeachment. They’re pictured holding hands during a news conference where he discussed .

The family went to Martha’s Vineyard for a vacation and when they returned Hillary had decided to stand by her husband and fight his impeachment. On the helicopter ride there Chelsea took them both by the hand.

An emotional Hillary says in the film: ‘When she did that, oh my gosh, I thought that’s just so incredible, so strong and so wise’. Hillary told Bill that he had to tell their daughter Chelsea, who was 18 at the time, about the affair. The family are pictured together holding hands the day after Bill confessed to the affair.

March 1997 – The affair ends, according to Lewinsky. She said they had engaged in sexual encounters on nine occasions

January 7, 1998 – Lewinsky signs an affidavit stating that she never had a sexual relationship with Bill Clinton. This was at the request of attorneys representing Paula Jones, who had accused Clinton of sexual harassment in 1994

January 17, 1998 – News of the scandal first breaks on the Drudge Report

January 21, 1998 – The Drudge Report publishes allegations that Lewinsky had kept a ‘garment with Clinton’s dried semen’. The story is picked up by major news outlets

January 26, 1998 – President Clinton denies the affair while standing with his wife Hillary at a White House press conference. He says the famous line: ‘I did not have sexual relations with that woman’

January 27, 1998 – Hillary Clinton appears on the TODAY Show where she defends her husband and calls the claims ‘a vast right-wing conspiracy that has been conspiring against my husband since the day he announced his run for president’

February 6, 1998 – President Clinton says in a press conference that he will not resign from office

August 3, 1998 – A blood sample is taken from President Clinton for DNA testing against stains from Lewinsky’s blue dress

August 6, 1998 – Lewinsky begins to testify before the grand jury

August 17, 1998 – Clinton testifies to the grand jury where he admits to ‘inappropriate intimate contact’. He speaks to the nation in a televised address, finally admitting that he had a relationship with Lewinsky

December 11, 1998 – The House Judiciary committee votes to impeach, approving two articles of impeachment, including lying to a grand jury and obstruction of justice

December 19, 1998 – The House of Representatives votes to impeach President Clinton. Clinton vows to remain in office until ‘the last hour of the last day of my term’

January 7, 1999 – The Senate begins its trial of President Clinton

February 12, 1999 – The Senate acquits President Clinton on both charges of perjury and obstruction of justice