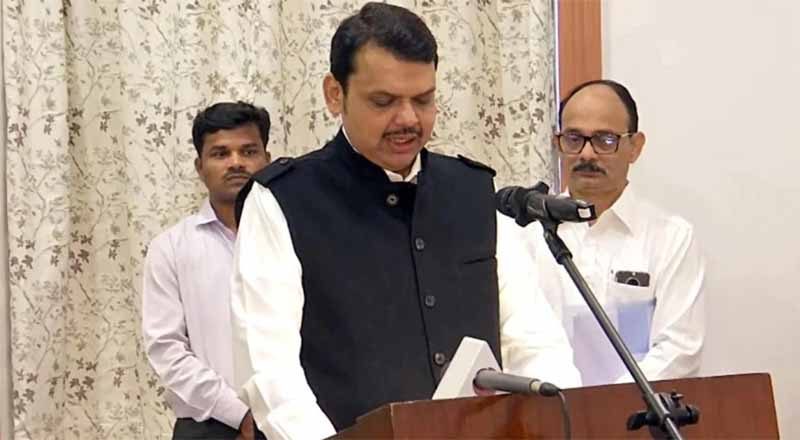 There were not many people at Raj Bhavan Friday morning when he was sworn in as Maharashtra chief minister for the second time, but the fact that 49-year-old Devendra Fadnavis managed to occupy the hot seat for the second time against all odds says something about his tenacity.

When he first became the CM in 2014, it was in a public ceremony at the sprawling Wankhede Stadium in south Mumbai, in presence of his mother, wife, daughter and thousands of BJP workers and supporters.

At Friday’s ceremony, which opposition Congress dubbed a clandestine affair after a night of intriguing political developments, the pomp and grandeur of the 2014 event was missing.

After results of the October 21 Assembly elections were announced on October 24, Fadnavis was all set to return as chief minister of Maharashtra, after steering the BJP to another electoral win and dealing the NCP-Congress a blow but bickering ally Shiv Sena played spoilsport.

The poll victory in Maharashtra for India’s main ruling party was not as decisive as it was hoping for.

The BJP, which contested 164 seats, bagged 105, while the Shiv Sena won 56 in the 288-strong Assembly but the alliance fell apart after the Sena insisted on sharing the CM’s post.

Fadnavis is a law graduate from Nagpur University and holds a postgraduate degree in business management. He was born and raised in Nagpur, home of the headquarters of the RSS.

Starting his political career in the 1990s, Fadnavis was an elected member in the Nagpur Municipal Corporation for two consecutive terms – in 1992 and 1997. He was also the youngest mayor of Nagpur, and the second youngest mayor in India.

He has represented the Nagpur-South West seat in the state Assembly since 1999.

With the BJP’s victory in the Lok Sabha polls and in the state elections, Fadnavis proved his credentials as an astute political leader who has left his political rivals behind in his rise to the top, said party insiders.

The NCP won 54 seats and the Congress 44 in the polls. Political observers describe Fadnavis as a patient listener and a “man of action” with extensive knowledge in various spheres. He is also known as a politician who is both erudite and popular with the people.

He has also proposed to set up a water grid for the perennially parched Marathwada region. He also said his goal is to make the state a ‘one trillion dollar economy’.

In the last five years, Fadnavis maintained his image as Mr Clean of BJP, while deftly handling corruption allegations against some of his ministerial colleagues.