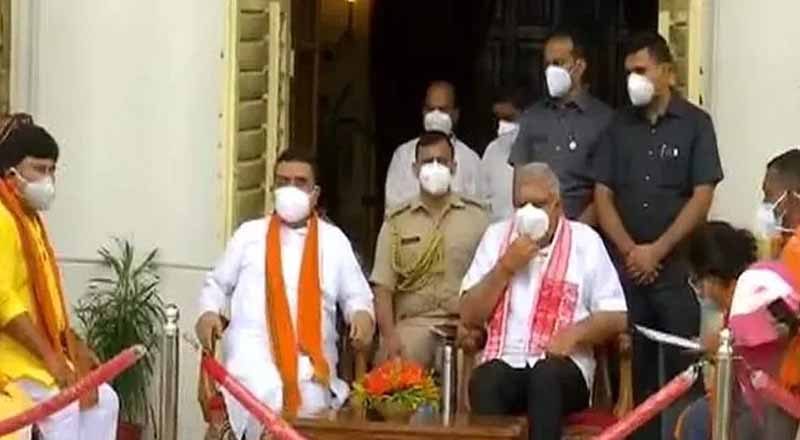 The BJP’s efforts to counter reports of the “reverse migration” of its leaders to Mamata Banerjee’s Trinamool Congress in Bengal failed on Monday as a section of its MLAs stayed away from Suvendu Adhikari’s meeting with the Governor.

Adhikari — who is also the Leader of Opposition in the Bengal Assembly — met Governor Jagdeep Dhankar with a delegation of party MLAs.The meeting was meant to apprise the Governor of “several inappropriate incidents happening in Bengal and discuss other important matters”.

But with 24 of the BJP’s 74 MLAs failing to accompany him, speculation started about the possibility of further reverse migration from the party. The matter also gave credence to the view that not all MLAs were ready to accept Mr Adhikari’s leadership.

Adhikari — who joined the BJP last December — had gained prominence in the party initially by convincing a large number of leaders to follow him and then with his victory against Mamata Banerjee from Nandigram in a closely-fought election.

After the election, he was named leader of opposition in Bengal and in a departure from the norm, was even invited to Prime Minister Narendra Modi’s cyclone review meet with Mamata Banerjee last month.

Sources have said several MLAs are upset and some are indeed in touch with the Trinamool, hoping to return following the footsteps of Mukul Roy. Suvendu Adhikari said they will seek to invoke the anti-defection law against those headed back to the Trinamool.

Last week, Roy — the first key Trinamool leader to join the BJP — returned to the Trinamool with his son Subhrangshu. Several other leaders, including Rajib Banerjee and Dipendu Biswas, are expected to follow suit.

Chief Minister Mamata Banerjee has said her party will “consider the case of those who had left TMC with Mukul for BJP and want to come back”. Her party said more than 30 MLAs have been in touch with them.

Before Roy, leaders like Sonali Guha and Dipendu Biswas had openly said that they wished to return to the party and sought the Chief Minister’s forgiveness.

The BJP has been maintaining that all is well. But Suvendu Adhikari said they will seek to invoke the anti-defection law against those headed back to the Trinamool.

Asked about his father who defected from Trinamool to the BJP, Suvendu Adhikari said he would only speak about the MLAs.

Along with senior leaders, even party workers now say they wish to return to the Trinamool.

A video from Bengal’s Birbhum showed BJP workers sitting on dharna outside the Trinamool office seeking to return to the party. The workers are seen holding placards and are heard apologising to Mamata Banerjee and appealing to her to take them.: NDTV