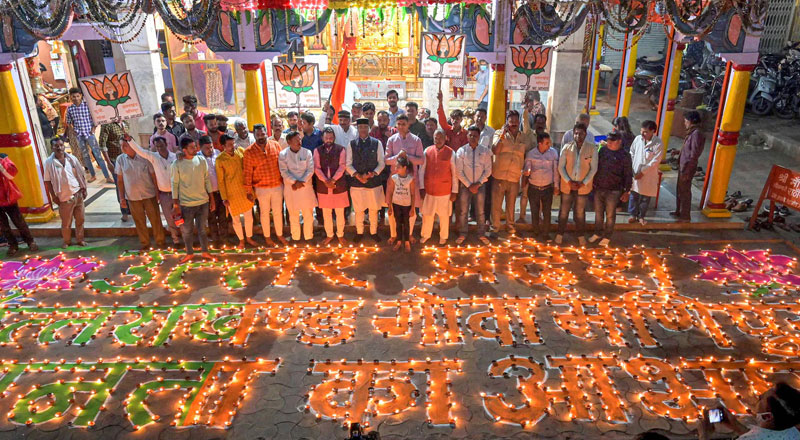 Assembly elections in Gujarat and Himachal Pradesh are slated to be held later this year.

A day after the Bharatiya Janata Party (BJP) asserted its electoral dominance by retaining power in four out of five states, the party on Friday began strategising for the next round of assembly elections with a focus on issues that will be the mainstay of its campaign and those that will emerge as challenges.

Assembly elections in Gujarat and Himachal Pradesh are slated to be held later this year.

Even as celebrations over the outcome of the assembly polls in Uttar Pradesh, Uttarakhand, Goa and Manipur continued across offices, the BJP began the process of shaping the contours of the campaign for the next elections, senior party leaders familiar with the developments said.

At the same time, Prime Minister Narendra Modi on Friday held a roadshow and addressed a rally of over one lakh elected representatives of panchayat bodies as part of his two-day visit to Gujarat.

“This set of elections is a testament of the party’s inclusive policies and its popularity across castes and classes. We had identified a set of issues that would appeal to a larger subset of people, but the overwhelming support that the party has received from women shows the elections will now have to be designed around issues that resonate the most with this constituency of supporters,” one of the senior leaders said, seeking anonymity.

The recent set of assembly elections are not the only ones where women voters tipped the scales in favour of the BJP. The party has consistently benefitted from women voters since the 2014 general elections.

On Thursday, Modi said women had played a crucial role in these elections and had been BJP’s partner in the victory. “Nari Shakti has been our partner in this victory… Wherever women voters have voted more than men, BJP has got a bumper victory,” he said.

Stressing on the importance of women’s votes, the senior BJP leader quoted above said: “There is an acknowledgement that women’s voices matter, so the policies will be tailored around the issues that are gender-specific, and take into account matters that affect them… such as the impact of climate change on their lives…

With the decimation of the Congress in the assembly polls, the BJP is also assessing the rise of the Aam Aadmi Party (AAP), which stormed to power in Punjab and is striving to become the leader of the opposition camp.

In both Himachal Pradesh and Gujarat, the elections are typically a bipolar contest between the Congress and BJP.

“As of now, the AAP is no threat to the BJP. Their presence in Delhi and now Punjab does not make them a formidable opponent. The party is not the Mamata Banerjee of the North. They are, however, a threat to the Congress and have emerged as the party that has the capacity to defeat them as Mulayam Singh (Samajwadi Party) or Lalu Yadav (Rashtriya Janata Dal) did in the past,” a second leader said on condition of anonymity.

After the emergence of Mulayam Singh and Lalu Prasad Yadav in Uttar Pradesh and Bihar, respectively, in the period between 1989-90, the Congress had lost its position as a hegemon in the two states.

The focus on social engineering and delivery of social schemes that have been counted as reasons for the party bucking anti-incumbency in states will also continue to remain at the core of its electoral strategy, BJP leaders said.

While BJP’s opponents often accuse the party of propagating a Hindutva agenda to polarise the electorate, the outcome of the recently-held elections, particularly in Uttar Pradesh, have shown how the BJP has emerged as a choice for Other Backward Classes (OBCs) and Dalits.

“A lot of people are reviewing the results as the end of Mandal and rise of Kamandal politics,” the second leader quoted above said.