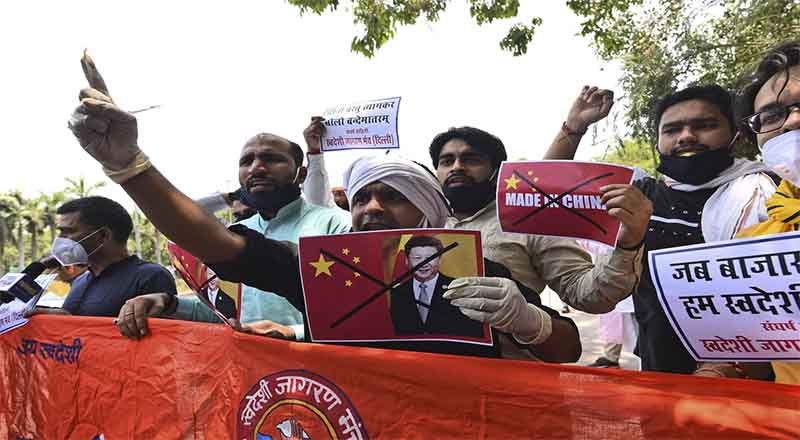 As the India-China standoff intensifies , social media is abuzz with netizens, influencers, celebrities and politicians calling for a complete ban on the use of Chinese products. While #BoycottChina, #BoycottChineseProducts were among the trending hashtags on social media platforms like Twitter, other hashtags like #TeachLessonToChina and #ChinaGetOut also filled several social media posts. Netizens are also circulating memes to attack China amid the border clashes.

The revolution against all Chinese product and companies has taken as the fire in India, presently over the social media. A huge campaign is yet to start by the trade associations in the coming week. The actor and politician Paresh Rawal Requested Amazon, Flipkart should tell which products are Chinese said, as a disclaimer.

He further tweeted that Amazon, Flipkart, Snapdeal and the other online merchants should ensure that they put a disclaimer on Chinese goods. “As your customer, I would like to know the origin of the product that I am buying,” he added. The actor also tweeted ‘#BoycottChineseProducts’ amid the India-China face-off at Ladakh’s Galwan Valley.

Secondly, there is a huge cyber-attack is expected today and these malicious actors are planning to spoof or create fake email IDs impersonating various authorities. The email ID expected to be used for the phishing campaign towards Indian individuals and businesses is expected to be from email such as ‘ncov2019@gov.in’ and the attack campaign is expected to start on June 21, 2020,” added the statement.

The cyber security agency has warned people against opening attachments in unsolicited emails, even if they come from people in their contacts list. CERT-In issued advisory on COVID 19-related Phishing Attack Campaign by Malicious Actors.

There is a strong awareness shared by the cyber experts, bankers by personalised message, to be careful while doing any e-transactions and the chances of Phishing attack from a group of hackers from china, to steal personal, financial data by ‘malicious actors’ expected on June 21. They claim to have 20 lakh individual e-mail IDs and plan to send e-mails with subject – ‘Free COVID-19 testing’. The government also asked people to remain in alert against a phishing attack that could be used to steal personal and financial information in the garb of official communication on coronavirus COVID-19 pandemic.

In Box: Armed forces given full freedom to deal with any aggressive behaviour by China’s PLA along LAC: Sources after defence minister’s review meet.

Amid the ongoing border dispute with China, the three defence forces have been given financial powers upto Rs 500 crore per project for the acquisition of critical ammunition and weapons which would be required in case an all-out or limited conflict breaks out.

At the same time in todays. All party meeting called by the Prime Minister Modi, a question raised by the opposition leader that, why did PM tell the all-party meeting that ‘no one intruded our territory’? Why did PMO delete these words from the official statement? If ‘no one intruded our territory’, how did 20 soldiers die & 85 injured & how were 10 jawans & officers captured by Chinese? Said, Kapil Sibal, Congress leader.

The armed forces deployed along the 3,500-km de-facto border with China have been given “full freedom” in giving “befitting” reply to any Chinese aggressive behavior, government sources said after Defence Minister Rajnath Singh held a high-level meeting with top military brass on the situation in eastern Ladakh.