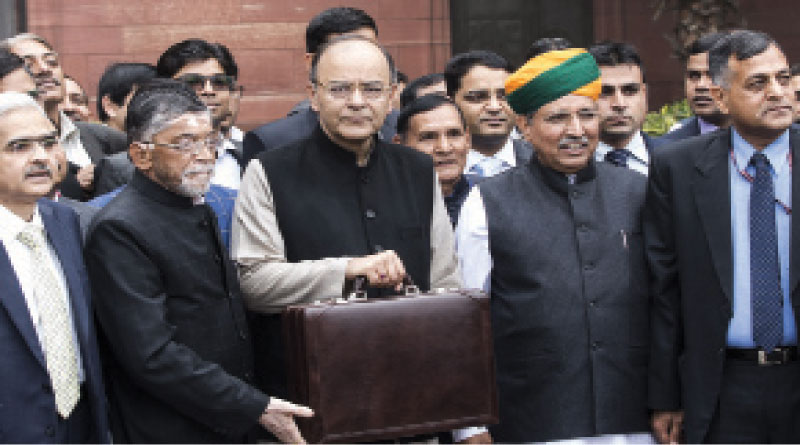 The budget for the year 2017 is out and it has evoked mixed reactions from the industry. The budget this year was significant for it was the first time that both the Rail budget and General budget had been presented together

The Budget Speech of the Hon’ble Finance Minister Shri Arun Jaitley was eagerly awaited by everyone. The theme of the Budget – Transform, Energize and Clean India augured well not only with the business class but also with the common people. Notwithstanding the diverse reactions that came out post budget, one thing evident was that the budget 2017 has been framed keeping a holistic growth in mind. Finance Minister Shri Arun Jaitley in his Union Budget announced a slew of measures to push important cogs of the economy. Many has hailed this budget as not to be a populist one, but a budget which caters sensibly to the poor, youth, farmers, villages and infrastructure to propel India further every year.

The Budget this year was unprecedented in one more way. The practice of tabling a separate railway budget has been scrapped from this year and the railway estimates had been a part of the Union budget.

Impetus for Growth of SMEs and Start-up Community

The new budget has made provisions to raise India’s innovation quotient, through the setting up of an innovation fund to encourage and fuel innovation amongst youth. The budget’s focus on making education more accessible to educationally backward blocks, along with the steps taken to ramp up the Skill India Mission will also help in maximizing the potential and capabilities of youth in the country.

The budget indeed holds a lot of promise for skilling the youth in the country. This is something that various industry bodies including the CII, have always advocated.

The budget also promoted the startup ecosystem with tax benefits. Reduction in the corporate tax for Medium and Small Scale Enterprises (MSMEs) to 25% will also go a long way in attracting more investment in the country. It will surely give the domestic sector a massive push and indirectly help the country in restoring its healthy GDP growth forecast.

Shilpa Mahna Bhatnagar, CEO & Co-Founder Evoxyz Technologies says, “The Union Budget 2017 gives me a mixed feeling, certainly more on the positive side. On the positive side, there has been tax reduction on MSMEs, these concessions will also build a platform for MSMEs to embrace the company’s format, reduction of custom duties on hardware for Fintech innovation and increase in child and women healthcare fund, the only concern which advances is that whether we as start-ups will be able to use them. The processes to leverage these reforms are so complex that entrepreneurs find it extremely difficult to use them; hence there should be more focus now on ease of execution of these reforms for start-ups to flourish.”

“The Union Budget 2017-18 is extremely positive for the common man, farmers, small and medium businesses and would drive significant growth in Indian economy,” says Rajiv Srivastava, MD, HP India. “The Government’s commitment to make taxation rate reasonable, tax administration fair and expand the tax base is the step taken in the right direction. The tax relief given by the Government for the middle class tax payers will definitely boost the purchasing power, thereby aiding the overall growth of the economy. The major tax relief given to the MSMEs and SMEs with an annual turnover of Rs. 50 crores would enable them to invest in job creation, increase capital expenditure and explore their digital journey.

Incentives for labour intensive sectors including housing, farming and dairy will help SMEs to create new jobs. Focus and attention to bank NPAs, as well as increasing bank capitalization is great step towards strengthening the financial system of the country. Finally, the income tax rate changes will encourage more people to report their incomes and create a larger tax net for the country.
Aadhaar based smart cards for monitoring the health of senior citizens is a great way to leverage the citizen identity database while marrying technology with health. The move will reduce the burden on our health machinery to some extent and open up avenues to explore more applications of digital citizen identity database.

Upgrading digital infrastructure to support cashless transactions in rural and semi urban areas will encourage more merchants and consumers to transact on non-cash and online platforms. Bipin Preet Singh, Founder & CEO, MobiKwik views that the focus on digital payments will lead to revolutionary transformation in Indians’ payment habits. “Digital payments will be the new normal in 2017 and we are very excited about this. As we become more digital, India will see new taxpayers and better transparency in incomes.”

The exemption of service charges for railway tickets booked via IRCTC will further act as a catalyst to encourage digital economy. This will push people to adopt digital economy and go cashless. Furthermore, citizens will become more responsible in terms of paying taxes and incomes will be transparent.

The Budget proposals also look to boost consumption. The impetus on affordable housing and rural infrastructure will boost lower and middle income and translate into consumption. Affordable housing focus along with the realty sector SOPs (carpeted area calculation, delayed capital gains tax on unsold inventory, infrastructure status and reduced interests on home loans) will provide the much needed leg-up to the realty sector (more buyers and therefore more affordable homes) and also increase adoption of professional approaches in this unorganized sector. The promise of doubling income for farmers through the committed investments and SOPs will help in getting much needed focus back to an important GDP contributing sector.

The provision to support NABARD in digitizing 63,000 primary agro-operatives is a healthy move in order to penetrate rural sectors to achieve its goal of a Digital India. Considering the power deficit situation in the country, the proposal to feed 7000 railway stations with solar energy will help in reducing dependence on conventional energy sources. The almost 1/3rd increase in resource allocation towards Integrated Power Development Scheme and Deen Dayal Upadhyaya Gram Jyoti Yojna (from INR. 7874cr to INR. 10635cr) is also a step in the positive direction.

Emphasis has also been given to areas like infrastructure development, skill development, encouraging manufacturing and on Digital India. The DigiGaon initiative announced to provide tele-medicine, education and skills through digital technology in rural India is heartily supported by everyone in the industry.

There has been a continued and a strong commitment towards increasing technology adoption and usage across critical sectors like education, agriculture, financial inclusion and rural and infrastructure development. This will further drive the digitization of India. However, the budget has fallen short of creating avenues to increase the manufacturing of the technology solutions in India beyond smartphones.

Finally, the reduction in tax rates for employees below 5L will also act as a catalyst in increasing the tax payers’ pool along with along with putting more money in the hands of tax payers especially the formal salaried employees.”

Overall, the Union Budget 2017 is mostly in line with the long-term economic development strategy of the present government. For the Retail/ FMCG segment, highway and road infrastructure focus will work well in tandem with the advantages of the GST implementation. This will also go a long way in allowing development of tier3/satellite towns closer to the Tier1/tier2 cities and thereby a little more even distribution of population across tiered cities and rural areas. The SOPs towards getting closer to a cashless economy (Digitization SOPs, BHIM app and Aadhaar Pay drive, removal of service charges on e-ticket booking etc.) will help continue the aggressive approach against the black money economy and thereby provide the country with more compliant tax paying citizens, thereby get closer to the 3% fiscal deficit goal by FY’19.

However, there are two important aspects that need to be focused on to make the Budget effective – one, effective implementation and two, more banking infrastructure in the rural areas and Tier 4/5 cities to enable higher digital economy adoption across a larger population. Overall, the budget is progressive, and one can expect accelerated growth of the Indian economy in the coming financial year.

“I commend the Finance Minister for delivering a Budget that is a clear continuation of policy direction. The Budget’s focus on investments in infrastructure creation while easing private sector’s access to credit will generate jobs and increase productivity. The thrust on digital economy, deployment of analytics in tax administration and initiatives on cyber-security demonstrate the significance of Information Technology among Government’s priorities. Corporate India welcomes the initiatives to expand the tax base and eliminate evasion. While the targeted proposals on corporate taxation are welcome, progressive steps towards achieving competitive tax rates could have attracted global investors,” admits Jatin Dalal, Chief Financial Officer, Wipro Limited.

However, not everyone is happy, as is apparent from the views of Nita Kapoor, Head – India New Ventures, News Corp. “Much like the Startup India initiative, the Union Budget 2017 has left the Indian startup community asking for more. Be it a 5 year tax holiday or the profit linked-deductions for start-ups are benefits which are virtually redundant. This is because there is a long gestation period for them to even break even, forget achieving profitability. Had there been fiscal incentives for private sector to support the setting up of more incubators through industry academic partnerships that would have been a positive for startups in India.”