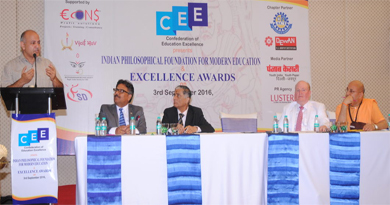 The objective of the conclave was to highlight the essential need of educating the students and young generation towards the key factors required for the civilized society through Civic Education. Civic Education is one subject which gets special attention and weight age in all developed nation, our present government has been trying their best to inculcate the sense of pride and respect towards the people and nation, act being a civilized citizen. Swach Bharat Abhiyan, Namami Gange and Khakhi are such initiatives taken in the same field. CEE is acting as the support hand to the Government to plug in the gap by educating institution’s heads towards the requirement and ways to execute. Officials of United service Institution (USI) of India, Think Tanks of Indian Defence System and Sh Pravez Hayat, ADGP of Bureau of Police Research Development (BPRD) appreciated the cause and offered the interest to support in framing and designing short program to be delivered in institutions.

The Conclave was hosted by Confederation of Education Excellence. In the conclave Honorable Shri Kaptaan Singh Solanki, Governor of Haryana graced the occasion as the Chief Guest of the event, this conclave was also witnessed by the Special Guest of honour Shri Manish Sisodia, Deputy Chief Minister of Delhi.

On the occasion Deputy Chief Minister Manish Sisodia said, “We should not put extra pressure of civic education on the students but the need of the time is that we should make the whole education civic so that the students can be civic through the basic education system. He also appreciated the efforts of the CEE for their initiative towards Civic education in the country”.