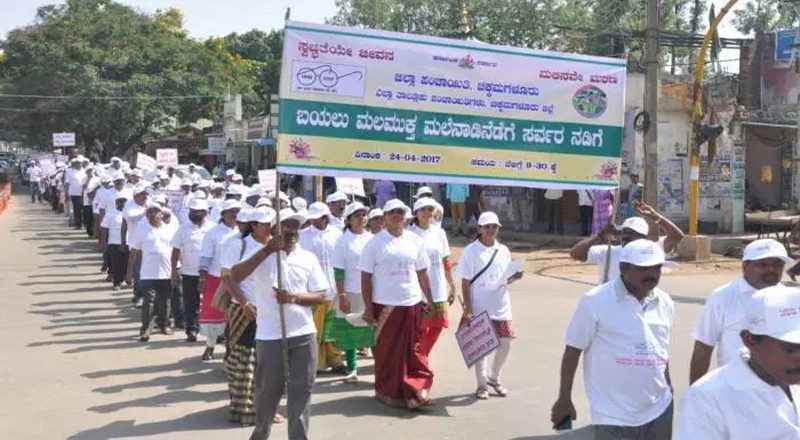 A gathering of 750-plus participated in the SBM (Swachh Bharat Mission) Jatha (rally), at the Taluk Office in Chikkamagaluru district in Karnataka. It was 9.30 in the morning when district officials, panchayat leaders, members of the Legislative Council, motivators, students and interested members of the general public gathered. The walk began at 9.30 a.m. from the Taluk Office and ended at 11.30 a.m. at Kuvempu Kala Mandir, covering a distance of about 1.5 kms.

The rally was held to show their solidarity to the movement which is set to change the sanitation history of their district, Sporting white caps and T-shirts with the iconic logo of Gandhi ji’s spectacles and the district SBM logo “Bayalu Mala Muktha Malenaadu”, meaning open defecation free Malnad, and the slogan “Swachhata ki ore” splashed across the front and back, the participants beamed with enthusiasm as they commenced the walk.

The rally was organized by the CEO of the Zilla Panchayat, Dr R. Ragapriya, and commenting on the same, she said, “We wanted to create awareness about matters relating to hygiene, the need to use toilets and the benefits such practices would bring to their families, the communities and the village.” According to her, people seemed to get the message.  It made them believe that cleanliness is not a job that one has to be forced to do.  Rather, it is a good habit and a healthy way to a healthy life. The exercise also helped inspire and motivate field level functionaries so they could champion the sanitation cause with renewed vigour and be the change agents in the war against open defecation ensuring sustainability of toilet usage. Another vital objective of the activity was to encourage rural folks, leading to change in their behaviour.

Currently, 139 gram panchayats out of 227 GPs, 591 out of 996 villages, and 5 out of 7 Taluks in the Chikkamagaluru district have been declared ODF.