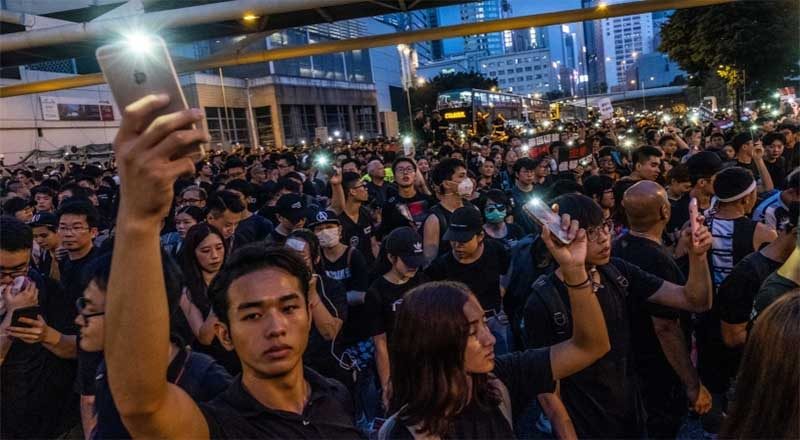 Twitter and Facebook removed accounts tied to China after another march in Hong Kong on Sunday, which organizers said had brought out 1.7 million people.

SAN FRANCISCO — China has adopted Russia’s playbook for spreading disinformation on Facebook and Twitter, deploying those tactics in its increasingly heated information war over the protests that have convulsed Hong Kong.

In recent weeks, Facebook and Twitter accounts that originated in China acted in a coordinated fashion to amplify messages and images that portrayed Hong Kong’s protesters as violent and extreme, the two social media companies said on Monday. On Facebook, one recent post from a China-linked account likened the protesters to ISIS fighters. And a Twitter message said, “We don’t want you radical people in Hong Kong. Just get out of here!”

Facebook and Twitter said they had now removed the accounts, the first time that the social media companies have had to take down accounts linked to disinformation in China.

For more than two months, antigovernment protests have gripped Hong Kong, with anger rising over China’s growing influence. Here are tactics the Chinese government is using to frame the narrative.

Facebook said it eliminated seven pages, three Facebook Groups and five accounts involved in the disinformation campaign about Hong Kong protesters. Twitter deleted 936 accounts and said it would ban state-backed media from promoting tweets after China Daily and other state-backed publications placed ads on its service that suggested the protesters were sponsored by Western interests and were becoming violent.

“These accounts were deliberately and specifically attempting to sow political discord in Hong Kong, including undermining the legitimacy and political positions of the protest movement on the ground,” Twitter said in a statement. “Based on our intensive investigations, we have reliable evidence to support that this is a coordinated state-backed operation.”

The removal of the China-backed accounts signal an escalation in the global disinformation wars. In 2015 and 2016, Russia pioneered disinformation techniques when it used Facebook, Twitter, Instagram and other social media to disseminate inflammatory messages intended to divide Americans in the 2016 presidential election. Since then, governments in many other countries — including Bangladesh, Iran and Venezuela — have also used Facebook and Twitter to sow discord at home and abroad.

China has been less visible about using Facebook and Twitter to spread disinformation, researchers said. Both services are blocked in the country and people instead spend time on homegrown social media services and messaging apps like WeChat and Weibo. The Communist Party has largely not needed Western social media because it already exerts tight control over state-backed media and content inside the country’s so-called Great Firewall.

But the recent Facebook and Twitter activity over the Hong Kong protests suggests that Beijing will use those services to spread its messaging outside the Great Firewall when it deems it necessary. Facebook and Twitter are not blocked in Hong Kong and are widely used. Some 4.7 million people in the territory log into Facebook at least once a month, while 448,000 use Twitter, according to eMarketer.

China may have previously dipped its toe into using Western social media to destabilize elections in Taiwan starting in 2018, said Graham Brookie, the director of the Atlantic Council’s Digital Forensic Research Lab. He added that China’s disinformation campaigns tended to be less wide-ranging than Russia’s and hew tightly to a set of foreign policy goals, including tying Taiwan and Hong Kong closely to the mainland.

“The Chinese have been watching what works and what doesn’t in the context of Russian information operations,” Mr. Brookie said. “China is testing the waters on what is effective and what they can get away with.”

The disinformation campaign against the Hong Kong protests also stands out because many of the tweets were written in English and targeted a global audience.