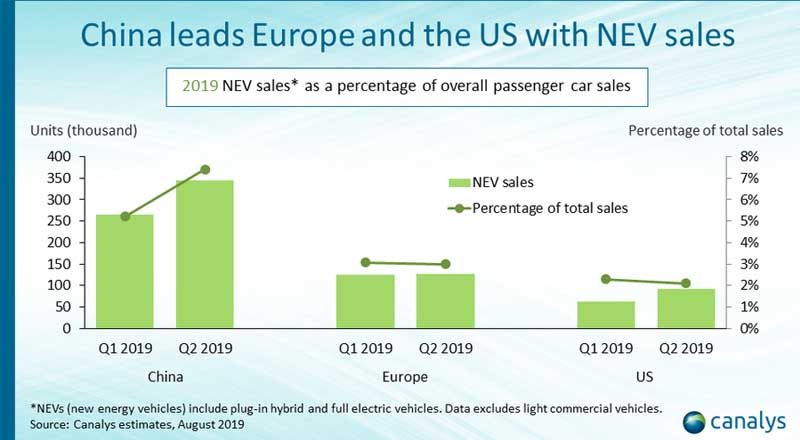 New energy vehicles (NEVs) represented 7% of all new passenger car sales in China in Q2 2019. China remains well ahead of other major markets. In contrast, NEVs (electric, fuel cell and plug-in hybrid vehicles) represented just 3% of new car sales in Europe in Q2 and only 2% in the US.

China is the largest market for overall new passenger car sales (petrol/diesel engines and NEVs), but total sales have been falling for several quarters due to the economic slowdown and US-China trade war. Sales fell by 16% in Q2 2019. Despite the decline, the key highlight of China’s automotive market in recent times has been the increased availability and sales of NEVs.

“The Chinese government has supported car-makers that manufacture NEVs. This has resulted in a much greater choice of consumer vehicles in China than anywhere else in the world,” said Jason Low, Senior Analyst at Canalys. “The government has made many NEVs built in China exempt from purchase tax, set car-makers ambitious NEV production targets, made it easier for buyers to obtain a license for a NEV than for a traditional vehicle, and given buyers financial incentives in the form of subsidies to purchase NEVs. These steps have produced excellent results.

“But a significant slowdown is coming,” said Low. “Customer subsidies for NEVs have recently been slashed as the government shifts focus to hydrogen fuel cell electric vehicles and refueling stations. The impact of the subsidy cut is already being felt. Leading NEV car-maker and battery supplier BYD has recently cut its 2019 sales forecast. The slowdown will put immense pressure on Chinese NEV start-ups, such as NIO, while Tesla will sense an opportunity and stands to benefit from its vehicles now being exempt from purchase tax in China.”

Europe and the US playing catch-up

“Despite the expected slower growth in China, NEV penetration across Europe (Norway being a rare exception) and the US will remain far behind China for some time,” said Chris Jones, Chief Analyst at Canalys. “Overall NEV sales in Europe and the US remain weak. There is limited vehicle choice, inconsistent government support and a still-growing charging network. Tesla continues to influence both markets, with Model 3 shipments to Europe starting in 2019 and demand in the US still strong. No other NEV has made anything like the impact the Tesla Model 3 has made in Europe and the US. Other car-makers, including VW, plan a significant shift to NEVs and will unveil new models soon, the success of which will define their future.”