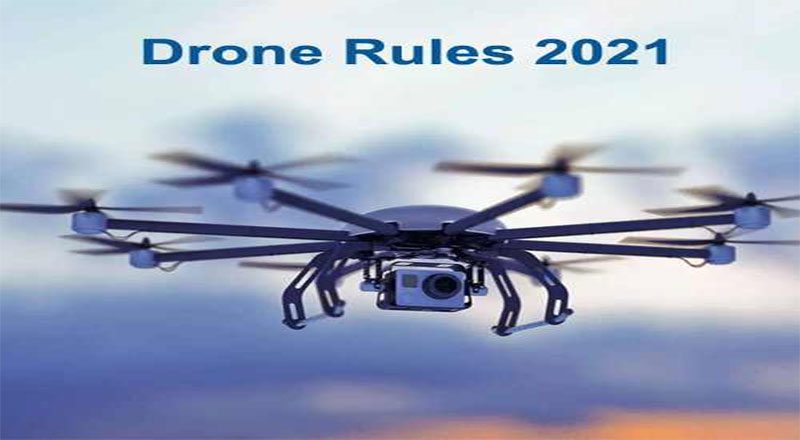 The Civil Aviation Ministry has approved the new Drone Rules 2021, which will replace the Unmanned Aircraft Systems Rules 2021, the government said in a Gazette notification.

The Ministry of Civil Aviation (MoCA) published the UAS Rules, 2021 in March this year. They were perceived as restrictive by academia, startups, end-users, and other stakeholders because they involved significant paperwork, required permissions for every drone flight, and only a few “free to fly” green zones were available.

Based on the feedback received, the government has decided to repeal the UAS Rules, 2021 and replace them with the liberalised Drone Rules, 2021.

Individuals and companies will find it easier and cheaper to own and operate drones in India, under a new national policy notified on Thursday.

Drones, due to their reach, versatility, and ease of use, have the potential to be significant job creators and economic growth generators, particularly in India’s remote and inaccessible areas. Given its traditional strengths in innovation, information technology, low-cost engineering, and massive domestic demand, India has the potential to become the world’s drone hub by 2030.

The policy, a liberalized version of rules first announced in March, will exempt a drone operator from seeking security clearance before registering a drone or applying for a licence. Also, foreign companies registered in India will be allowed to import and operate drones and their parts and will be regulated by the Directorate General of Foreign Trade.

Built on a premise of trust, self-certification and non-intrusive monitoring.

Designed to usher in an era of super-normal growth while balancing safety and security considerations.

Number of forms reduced from 25 to 5.

Quantum of fee reduced to nominal levels and delinked with size of drone. For instance, the fee for a remote pilot license fee has been reduced from INR 3000 (for large drone) to INR 100 for all categories of drones; and is valid for 10 years.

Digital sky platform shall be developed as a user-friendly single-window system. There will be minimal human interface and most permissions will be self-generated.

Interactive airspace map with green, yellow and red zones shall be displayed on the digital sky platform within 30 days of publication of these rules.

Yellow zone reduced from 45 km to 12 km from the airport perimeter.

No remote pilot licence required for micro drones (for non-commercial use) and nano drones.

No requirement for security clearance before issuance of any registration or licence.

No requirement of Type Certificate, unique identification numberand remote pilot licence by R&D entities operating drones in own or rented premises, located in a green zone.

No restriction on foreign ownership in Indian drone companies.

Import of drones to be regulated by DGFT.

Coverage of drones under Drone Rules, 2021 increased from 300 kg to 500 kg. This will cover drone taxis also.

Remote pilot licence to be issued by DGCA within 15 days of pilot receiving the remote pilot certificate from the authorised drone school through the digital sky platform.

Testing of drones for issuance of Type Certificate to be carried out by Quality Council of India or authorised testing entities.

Type Certificate required only when a drone is to be operated in India. Importing and manufacturing drones purely for exportsare exempt from type certification and unique identification number.

Nano and model drones (made for research or recreation purposes) are exempt from type certification.

Manufacturers and importers may generate their drones’ unique identification number on the digital sky platform through the self-certification route.

Easier process specified for transfer and deregistration of drones through the digital sky platform.

Drones present in India on or before 30 Nov 2021 will be issued a unique identification number through the digital sky platform provided, they have a DAN, a GST-paid invoice and are part of the list of DGCA-approved drones.

Standard operating procedures (SOP) and training procedure manuals (TPM) will be prescribed by DGCA on the digital sky platform for self-monitoring by users. No approvals required unless there is a significant departure from the prescribed procedures.

Safety and security features like ‘No permission – no takeoff’ (NPNT), real-time tracking beacon, geo-fencing etc. to be notified in future. A six-month lead time will be provided to the industry for compliance.

Drone corridors will be developed for cargo deliveries.

Drone promotion council to be set up by Government with participation from academia, startups and other stakeholders to facilitate a growth-oriented regulatory regime.

This policy comes less than a fortnight after the ministry of civil aviation (MoCA) and the Directorate General of Civil Aviation (DGCA) permitted 10 organizations, including state governments such as Karnataka and private companies like Mahindra and Mahindra Ltd, Bayer Crop Science, Indian Institute of Tropical Meteorology, Pune and National Health Mission (Mumbai), to use drones for a year.

The rules will replace the UAS (unmanned aircraft system) Rules 2021 issued on 12 March, the aviation ministry said in a statement.

The new Drone Rules will tremendously help startups and youth working in the sector. It will open up possibilities for innovation & business. It will help leverage India’s strengths in innovation, technology & engineering to make India a drone hub,” Prime Minister Narendra Modi said in a tweet.