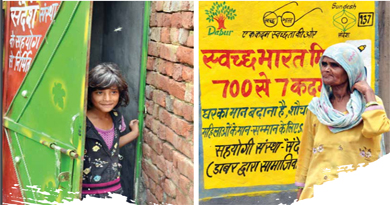 On the occasion of the third anniversary of Prime Minister Narendra Modi’s ambitious Swachh Bharat initiative, Dabur India has helped 12 villages in Uttar Pradesh and Himachal Pradesh achieve ‘Open Defecation Free’ (ODF) status. The company has targeted to more than double the number of ODF villages under its fold to 26 by the end of 2017-18 fiscal.

The 12 villages declared Open Defecation Free following sustained efforts by Dabur India Ltd include eight in Uttar Pradesh and four in Himachal Pradesh. In all, the company has helped construct toilets in over 2,600 households across these villages to achieve this feat. In addition, separate toilet blocks for boys and girls are also being constructed in nearly 20 schools across five states – Uttar Pradesh, Himachal Pradesh, Uttarakhand, Rajasthan and Assam.

“As a company, Dabur is committed to its motto of being dedicated to the Health & Well-Being of every household. The sanitation exercise in rural India, covering both households and schools, is part of this mission. Our intention to make 26 villages across Uttar Pradesh, Uttarakhand and Himachal Pradesh Open-Defecation Free by the end of the 2017-18 financial year and we are well on track. Our idea to improve the overall hygiene standards in these villages and turn them into model villages, offering a variety of services, from operating health posts to vocational training programmes for the youth,” said A Sudhakar, CSR Head – Dabur India.

Dabur had in 2016-17 constructed nearly 1,254 household toilets under its mega initiative “700 se 7 kadam” that sought to protect the dignity of women in the hinterland by bringing toilets closer to them. “At Dabur, we believe that an organization’s true worth lies beyond its business, and is best reflected by the service it renders to the community and the society. Businesses have a responsibility to sub serve larger societal goals as they have the ability to contribute significantly and impactfully to sustainable and inclusive development. Since toilets are constructed in the individual households, the maintenance of these toilets is the responsibility of the individual household, making the project sustainable in the long run,” Sudhakar said.

In addition to constructing household toilets, Dabur and its CSR arm Sundesh, have also been organizing several programmes and cleanliness awareness drives across these villages to sensitize the residents about keep their surroundings clean.

The ‘700 se 7 kadam’ initiative began with Dabur conducting a detailed survey of the villages to ascertain the status of household toilets. As per the data collected from village, it was observed that nearly 50 percent of households in most villages do not have individual toilets. Villagers were using open spaces to defecate, which was posing a serious threat to their health, in addition to compromising the safety of women and girls.

Due to open defecation, the cases of diarrhea, cholera, typhoid and hepatitis A were also rising at an alarming pace in these villages. Due to unavailability of toilets in houses, family members, especially women and adolescent girls, had to wake up in the wee hours and head to the outskirts of the village to defecate. Their low income was the biggest stumbling block in constructing toilets in their households.