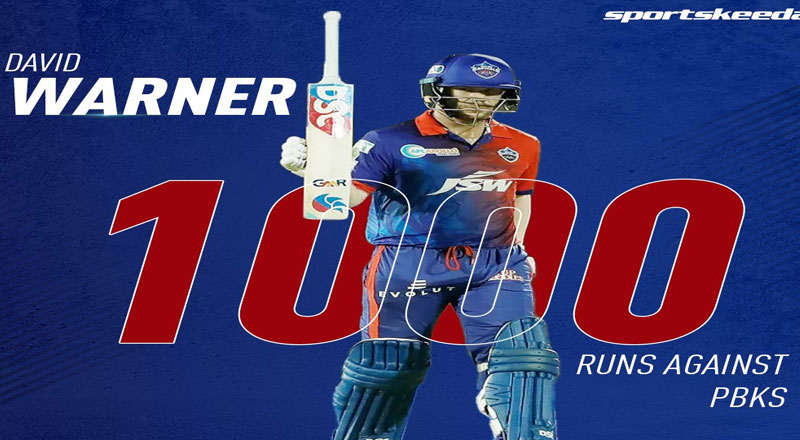 IPL 2022, DC vs PBKS: Even as records tumbled during Delhi’s successful chase against Punjab Kings on Wednesday, David Warner became only the 2nd man to score more than 1,000 runs against a franchise in the history of IPL.

David Warner achieved another milestone in his storied Indian Premier League career on Wednesday when he completed 1000 runs against Punjab Kings in Match 32 of IPL 2022 at the Brabourne Stadium in Mumbai. Warner became the first man in the history of the tournament to achieve the landmark against the Punjab franchise.

Warner joins Rohit Sharma in an exclusive club of batters. The Mumbai Indians captain is the only other batter in the IPL with more than 1000 runs against a single franchise.

Warner averages in excess of 50 against Punjab Kings and strikes them at 142,.35. On Wednesday, the Australia opener scored his 12th half-century against PBKS as Delhi Capitals made light work of a 116-run target to register their 3rd win of IPL 2022 season.

Notably, Warner also has an opportunity to complete 1000 runs against KKR.as he is just 24 runs away from the landmark.

Delhi Capitals on Wednesday set a series of records as they hammered Punjab Kings by 9 wickets in a spirited show after Covid-19 crisis in their camp. Captain Rishabh Pant conceded that there were nervousness and confusion in the lead up to Wednesday’s match against PBKS after two of their players — Mitchell Marsh and Tim Seifert — tested Covid positive.