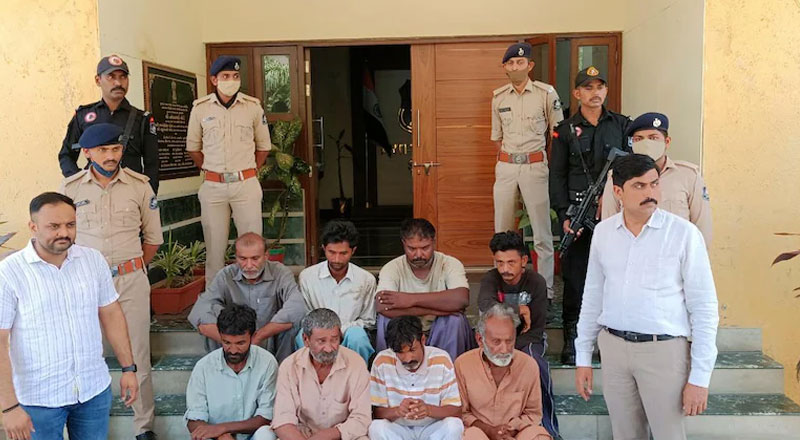 Four men, including one Afghanistani, were arrested by the Gujarat ATS and NCB on Thursday with 36 kg heroine. The officials are investigating whether the accused have terror funding or connections with terror groups.

Four more men, including one Afghanistan national, were arrested by the Gujarat Anti-Terrorism Squad (ATS) and Narcotics Control Bureau (NCB) on Thursday with 36 kg heroine in connection with a huge drug consignment which was seized from a Pakistani boat near the Gujarat coast.

The accused were nabbed from Delhi’s Okhla area.

Earlier, the Gujarat ATS and NCB had held nine Pakistanis. The police believe that there is a whole syndicate operating from Pakistan.

The police are also investigating whether the accused have terror funding or connections with terror groups and if the money from the drug supply was given to terror groups.

Deputy Superintendent of Police (DySP) KK Patel, Gujarat ATS said, “Nine Pakistanis were arrested while bringing a huge consignment of drugs from Pakistan. The NCB and Gujarat ATS teams are jointly investigating the case further. The accused have been remanded to ATS custody by the court. One of the accused is being treated because he received a bullet injury.”

Patel added, “On further investigation, we found the Delhi connection. Four accused were arrested near Delhi. Our teams are still in Okhla and conducting investigations with NCB teams. Total 36 kg of drugs have been seized.

The Indian Coast Guard (ICG) and the Gujarat Anti-Terror Squad (ATS) on Sunday apprehended a Pakistani fishing boat with nine crew members on board and recovered an unspecified quantity of narcotics from them on Sunday night.

Gujarat DGP Ashish Bhatia said the heroine seized was from Afghanistan. The NCB officials had confirmed the seized items as drugs.