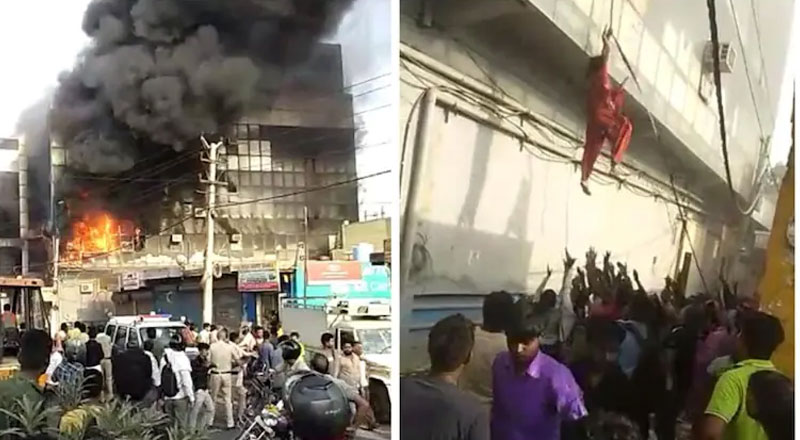 As mTwenty-seven people have been killed and 12 sustained injuries. The fire broke on the 1st floor of the building which is an office of a CCTV cameras and router manufacturing company.

Heart-wrenching scenes were witnessed in Delhi as a massive fire ripped through a three-storey building near the Mundka metro station on Friday, claiming at least 27 lives. Several videos – shared on social media – showed people crying for help while some jumped from the building in an attempt to escape from the blaze.

One of the clips shows the fire department rescuing people from the building, using cranes. Visuals also showed people using ropes to escape amid a cloud of black smoke. The Delhi Police officials – at the site – were also seen breaking windows to help those trapped inside.

The police said that some people got injured while trying to escape and were shifted to a hospital, news agency PTI reported.

The blaze at the three-storey building was doused late at night following a six-hour-long firefighting operation. More than 30 fire tenders were present at the site.

Twenty-seven people have been killed and 12 sustained injuries. The fire broke on the 1st floor of the building which is an office of a CCTV cameras and router manufacturing company

The police received a call about the fire at 4.45 pm on Friday following which they reached the location. On preliminary inquiry, it was found

The owners of the CCTV cameras and router manufacturing company on the building’s first floor have been arrested. The police said on Friday that they have been identified as Harish Goel and Varun Goel.

Meanwhile, the owner of the building Manish Lakra is on the run, the police said.

“The building did not have a fire NOC. The owner of the building has been identified as Manish Lakra who lived on the top floor. Lakra is currently absconding, teams are on the job and he will be nabbed soon,” DCP Sameer Sharma (Outer District) told reporters on Friday, news agency ANI reported.