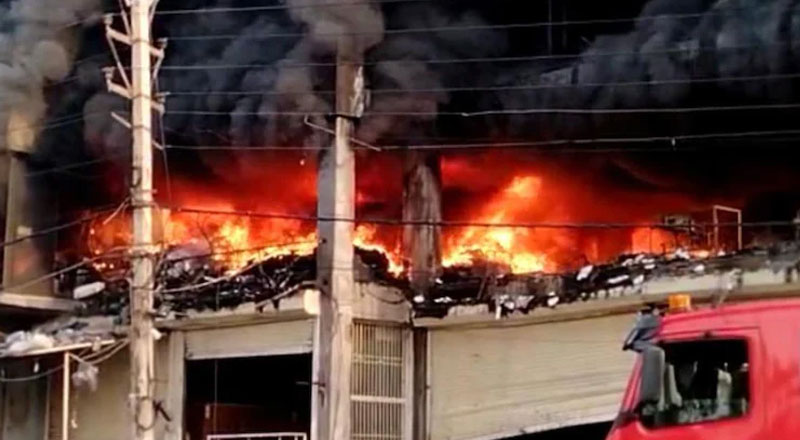 In a massive fire that broke out in a building near Mundka metro station in Outer Delhi on Friday,

27 people are said to have lost their lives. The toll was likely to go up, Delhi Fire Services chief Atul Garg said, stating that the fire continued until Friday night and the rescue operation was underway.

The fire broke out in the office of Cofe Impex Pvt Ltd which manufactures CCTV cameras. The Delhi police have arrested its owners. “We have detained company owners Harish Goel and Varun Goel,” said DCP Sameer Sharma.

During the day, Delhi Fire Services had sent 27 fire tenders to the spot. Garg had earlier said, “It’s a massive fire. So far, we have recovered 20 bodies from the first and second floors and teams are now trying to reach the third floor. All the bodies are charred.”

Fire began on the first floor and then spread to the second and third floors, the police have said after an inquiry. The building’s single entry, exit point made escape difficult, according to police.

“On preliminary enquiry, it has been learnt that the building is a three-storey building and is a commercial building generally used for providing office space to companies. The fire started from the 1st floor of the building which is an office where CCTVs and routers are manufactured,” said DCP Sharma.

DCP Sameer Sharma has confirmed that more than 12 people have been injured in the fire. The police have not been able to identify any of the victims who lost their lives, DCP Sameer Sharma said.

Delhi Chief Minister Arvind Kejriwal tweeted, “Shocked and pained to know abt this tragic incident. I am constantly in touch wid officers. Our brave firemen are trying their best to control the fire and save lives. God bless all.”

According to the fire department, the death toll could rise up to 30 as charred remains were found in the building during cooling operations on Saturday morning. Twelve injured were undergoing treatment at a hospital.

Delhi chief minister Arvind Kejriwal on Saturday announced a compensation of Rs 10 lakh each to the kin of the deceased and Rs 50,000 for those injured in the Mundka building fire incident that claimed 27 lives.