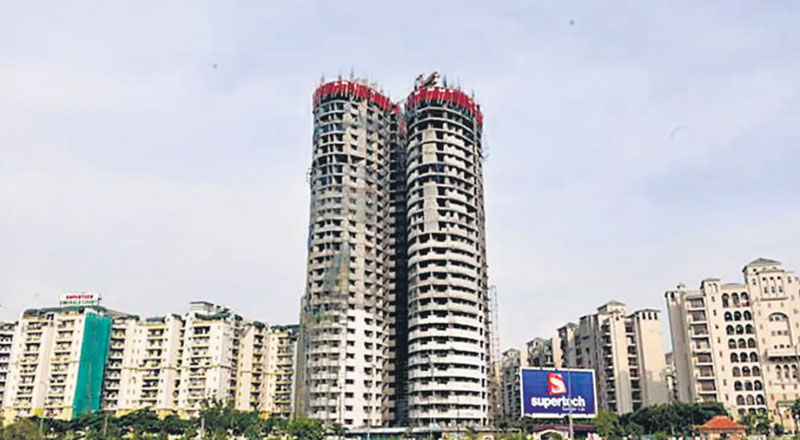 Supertech, the Delhi-NCR-based developer with several ongoing projects in Noida, Greater Noida, Gurugram and Ghaziabad has gone into insolvency on March 25. The move comes following the Delhi bench of the National Company Law Tribunal admitted a petition filed by the Union Bank of India for non-payment of dues of Rs 431,92,53,302 as on 31.01.2021.

This order may impact over 25,000 homebuyers who had their homes booked with the developer for several years and were awaiting possession. However, Supertech claimed that the company has 38,041 customers out of which 27,111 homes have been delivered.

NCLT has appointed Hitesh Goel as the insolvency resolution professional (IRP) for Supertech under the Insolvency and Bankruptcy Code (IBC). The one time settlement proposed by Supertech was rejected by the bank and arguments were heard, after which the tribunal had reserved its order in the case on March 17, 2022.

Reacting to the order, Supertech said that it will be approaching NCLAT in appeal against the order.

“In the matter of appointment of IRP in one of the Supertech Group Companies, by the National Company Law Tribunal (NCLT), management of the Company stated that the Company will be approaching NCLAT in appeal against the order as the matter belongs to a financial creditor. In the interest of homebuyers, preference was given to construction and delivery of projects over repayment of bank dues which can be fulfilled after project completion. As all the projects of the Company are financially viable, there is no chance of loss to any party or financial creditor. The order will not affect operations of any other Supertech Group Company,” it said in a statement.

The company said that the NCLT order will not impact the construction at all ongoing projects or operation of the company and “we are committed to giving delivery of units to allottees. We have a strong record of delivering more than 40000 Flats during the last 7 years and we shall continue to give delivery to our buyers under our “Mission Completion – 2022” under which we have undertaken a target of delivering 7000 Units by December, 2022.”

Supertech is not the first developer to go under insolvency. Jaypee Infratech went into the insolvency process in August 2017 after the NCLT admitted an application by an IDBI Bank-led consortium.

Supertech has also been in the news lately after the Supreme Court on August 31, 2021 ordered the demolition of its 40-storey under-construction twin towers located in Noida for violation of building norms in “collusion with Noida officials