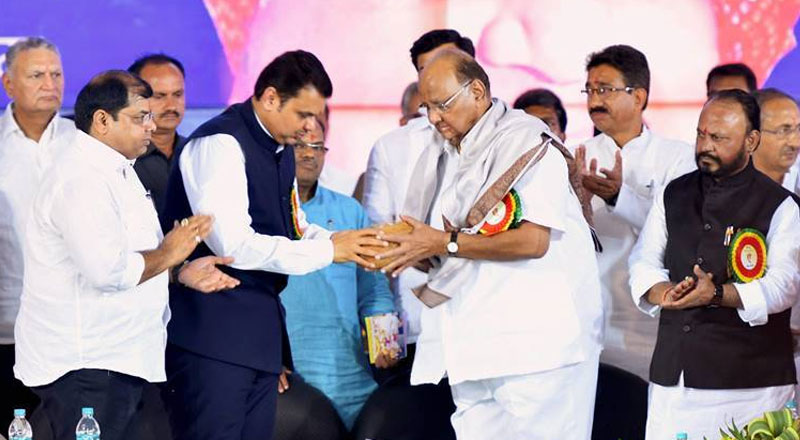 Former Maharashtra chief minister and Bhartiya Janata Party (BJP) leader Devendra Fadnavis on Friday slammed
Nationalist Congress Party chief (NCP) chief Sharad Pawar over his comments on the film ‘The Kashmir Files’ and alleged that the latter criticized the film as it did not suit his “political agenda of appeasement”.

In a series of tweets, the former chief minister dug up past NCP’s statements and alleged that the party’s statements had been “in line with NCP’s decades-old track record of appeasement policy & politics and polarising the society on a communal basis”.

Attacking Pawar on his statements on ‘The Kashmir Files’, Fadnavis said, “The Kashmir Files movie is not against any religion but it is against those who chose to look the other way when people were suffering, because they felt that it suits their political agenda of appeasement, thereby achieving a communal divide”.

He further added that such acts and approaches to disturbing harmony of the society cannot be accepted in Dr Babasaheb Ambedkar’s India.

Accusing Pawar of showing “double standards”, Fadnavis questioned why the film based on real testimonials of the sufferings of Kashmiri Pandits disturbed him as it did not suit his “pseudo-secular agenda”.

Commenting on Pawar’s old statements during the Mumbai 1993 bomb blasts, Fadnavis said that Pawar invented the “13th blast in a Muslim area”.

Instead of law and order, appeasement was his first priority,” he added. Further, he labelled Pawar’s statements like ‘Minorities decide whom to defeat’, and Hindu Terror’ as “invoking”.

Lashing out at Pawar over Azad Maidan violence, he said, “In 2012, when India & NCP were in power in Maharashtra, the shameful Azad Maidan violence happened in the heart of Mumbai. The Amar Jawan Jyoti was desecrated but NCP, which held the Home Ministry portfolio was soft on Raza Academy and changed the Mumbai CP instead!.

Highlighting that the NCP called Ishrat Jahan “innocent”, he alleged that the NCP leaders extended help to Jahan even went to the extent of demeaning the Intelligence Bureau even though they themselves were in power at that time. (ANI