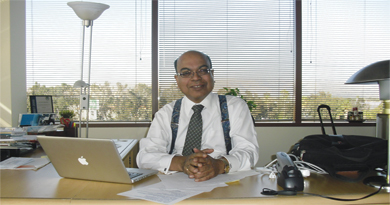 Budget in India is a big affair. The budget build-up starts much before its presentation. Media and people immediately get affected by the Budget proposals thereafter, speculating about various fiscal provisions the Finance Minister may resort to.

Every group or industry segment or trade union has their own axe to grind. I still have to find an industrialist who would happily say, “Hey Finance Minister, our sector is doing well. You may withdraw the sops that have been extended or impose new levies on our profits or revenues.” As humans, our aim is to maximize from every opportunity that is presented before us.
I must confess that I am not a great follower of budget pre-build-up and post comments. But this year’s Budget was somewhat different. One of the IT magazines sought my comments on the impact of proposals on the IT sector in the Budget.

My effort to gain some insight into the Budget proposals on IT did not bear any positive results. I did not hear any comment by an expert on the impact of Budget proposals on the ICT sector. I got more educated by reading the tickers in the TV channel that I watched, which displayed that there was an increase in the import duty on certain goods like mobile phones, medical devices and a few more items primarily to create an enabling situation for the domestic industry to produce more as a part of the “Make-in-India” program. Luck would have it while penning this piece, I read about the first rollback of the Budget proposals. Even before anyone has pointed out the incongruity, the increase in import duty on medical devices was withdrawn. There was a twist in the story. It attributed the withdrawal to the pressure being exerted by the US medical device lobby.

IT industry is going through a radical transformation. According to reports published by major consulting organizations, approximately 100,000 IT professionals will be rendered obsolete every year, and they need retraining in new technologies. The Finance Minister during his Union Budget 2018 said that the government will explore Artificial Intelligence and Machine Learning technologies.

He added that the global economy is transforming into digital economy, thanks to the development of cutting-edge technologies in the digital space. “Technologies like Machine Learning, Artificial Intelligence, Internet of Things, 3D Printing, and initiatives like Digital India, Startup India and Make in India would help in establishing itself as a digital economy,” he said. He added that Niti Aayog will establish a national program to direct the efforts in the area of AI, including research and development of its applications. “We would invest in research, training and skilling in Robotics, Artificial Intelligence, Digital manufacturing, Big Data Analytics, Quantum communications and others,” he said. In addition, the Finance Minister should have provided financial initiatives to the private sector in setting up retraining programs in these new technologies. Necessitating skilling of IT employees as they have been lately burdened with the pressure of feeling redundant, will go a long way in curbing job loss by creating and defining new roles for employees. Not only will this help in job creation but will also advance the nation in the competitive global space. These efforts will also assist the government to move towards its Digital India vision.

But the apprehensions expressed from different quarters should merit our consideration. The primary concern is about the intrusion into the privacy of a person, family or community by using technology. A technology platform will have two uses. One for using it for the welfare of the people, such as extending civic facilities online to cut down the drudgery, such as ticket booking which can be done from the comfort of your office or home. Earlier, you would have bored a hole in your pocket while making a lightning call from Delhi to Chennai or any other stations. Now, one can call at any time anywhere at a fraction of that cost. There are several such examples, which one can take up from ordinary life.

Then, what is the flip side of technology? First and foremost, the loss of privacy since technology can be used to peep into your private life. Why should state know about what you buy from a medical store or the disease that you like to disclose only to your doctor, family and loved ones. Why should your health profile land up in the hands of your business competitor? At a macro level, why should a country’s secret be in the public domain, particularly with your enemy country? Wiki leaks behind us the media trials and tribulations that it has triggered, one should draw a line between the information that can be shared and one that it should be exclusively protected – be it about an individual or a society or a state?

I do not think anyone has a straight answer for that. I feel it has to evolve. The society where technology plays the major role in connecting and blending the ethos of different groups and segments should come out with unique cultural moorings that balance people’s needs for welfare and progress to that of the requirements of the statecraft. That cannot come through an authoritarian disposition or court rulings or fiats. Maybe, it has to evolve through consultations, compromises and understanding each other’s needs and deeds.