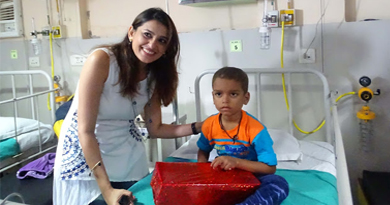 When Indian Television and Bollywood film actress, Smita Bansal met child cancer patients, there was a smile on their faces and glow in their eyes. The actress reached Bhagwan Mahaveer Cancer Hospital to meet child cancer patients who are being treated there. The actress spent quality time with the kids and fulfilled their wishes that brought happiness to their faces.

Seeing Smita Bansal the child cancer patients were very excited and overjoyed. Some of them asked for a selfie and also took her autograph. Seeing the enthusiasm of the children, Smita Bansal said, “We should learn from these children that how they scatter happiness around the world with taking a positive shape in life and with a smile on their face even after fighting against a dreadful challenge in their lives on daily basis. These children spread a positive energy.”

Dreamz Foundation’s objective is to fulfill one true wish of children aged between 1 and 18 years who are getting treated at Bhagwan Mahaveer Cancer Hospital and Research Centre, Jaipur. These efforts also have a positive effect on their health and the fear of coming to the hospital also ends.