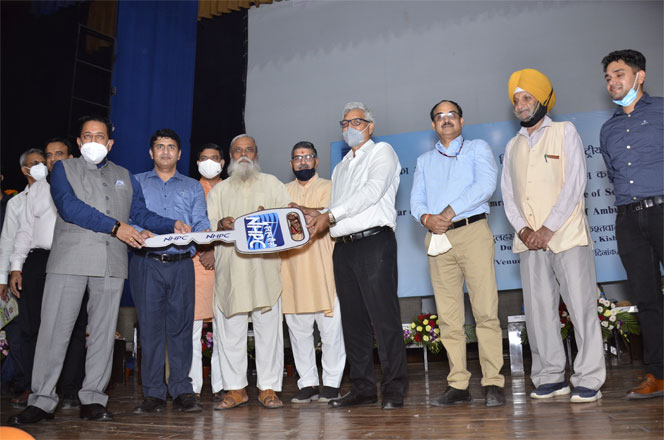 Speaking at the event, Dr. Jitendra Singh encouraged people to come forward to serve the nation. He also spoke about the ongoing projects of NHPC in district Kishtwar and said that in the coming time, Kishtwar is going to become a power hub of power generation with the  completion of these projects. The projects will provide employment to the local and will lead to the development of the area. He appreciated the work being done by NHPC

Addressing the function, Shri A.K. Singh, Chairman and Managing Director, NHPC said that various programs are being organized by NHPC under Azadi Ka Amrit Mahotsav and this program is also being organised under the same Mahotsav. He said that NHPC is engaged with many social development activities at the local level through NHPC’s CSR Scheme and today an ambulance equipped with ventilator and other modern facilities is being handed over to Sewa Bharti NGO under CSR & SD initiative.

During the program Dr. Jitendra Singh and Shri A. K. Singh handed over the keys of the Ambulance to the officials of Seva Bharti NGO.

Dr. Anil Kumar Manhas, President Sewa Bharti, Jammu & Kashmir expressed his gratitude to NHPC for providing ambulance under CSR scheme. He said that the needy people of Kishtwar and adjoining areas would get benefit from the ambulance service and this ambulance service would be provided to the people on no profit or no loss basis. Shri Murlidhar, All India Co-Organization Minister, Seema Jagran Manch congratulated NHPC CMD Shri A. K. Singh and explained about the social work being done by his organization

During the program, a seminar on the topic of national integration and the role of service work and ambulance handing over program was also organized.