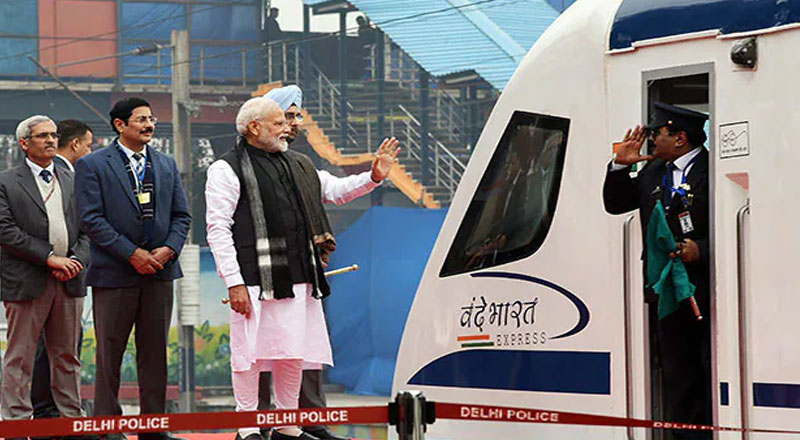 Today is also Army Day. Every Indian is proud of his army. The contribution and bravery of the Indian Army in the defence of the country, in protecting the borders of the country, is incomparable. I congratulate all the soldiers, ex-servicemen and their families.

The gaiety associated with Pongal, Magh Bihu, Makar Sankranti and Uttarayan festivals is visible everywhere. Like the major occasions and festivals connect the country from Kashmir to Kanyakumari and Attock to Cuttack, similarly Vande Bharat train also provides opportunity to understand, know and connect various parts of the country in the spirit of ‘Ek Bharat Shreshtha Bharat’. The Vande Bharat Express train also connects our shared culture and faith as a nation. This new train will connect cities like Hyderabad, Warangal, Vijayawada and Visakhapatnam. Many important places related to faith and tourism fall in this route. Therefore, devotees and tourists will also be greatly benefited by Vande Bharat Express. The travel time between Secunderabad and Visakhapatnam will also be reduced by this train.

It is also worth noting the speed with which Vande Bharat is expanding. The Secunderabad-Visakhapatnam Vande Bharat is the first train in 2023. And you will be happy that this is the second Vande Bharat train which has been launched in the country within 15 days. This shows how fast the Vande Bharat campaign in India is realizing the change on the ground. The Vande Bharat train has been designed and built in India. Innumerable videos of its speed have captured the hearts and minds of the people and dominate the social media. I will present another statistic which is very interesting. In the last few years, seven Vande Bharat trains have covered a total distance of 23 lakh kilometers. This is equivalent to circumambulating earth 58 times. So far, more than 40 lakh passengers have travelled by these trains. The time saved by the people travelling in these trains is also unparalleled.

Connectivity has a direct relation with speed and both of them have a direct bearing on development. Connectivity infrastructure not only connects two places, but it also connects dreams to reality. It connects manufacturing with the market and talent with the right platform. Connectivity expands the possibilities of development with it. That is, where there is ‘Gati’ (speed) there is ‘Pragati’ (progress) and when there is progress, prosperity is certain. We have also seen the time when very few people used to get the benefit of development and modern connectivity in our country. As a result, the time of a large population in the country was spent only in commuting and transport and the common citizen, the middle class people, suffered a lot. Today, India is moving forward leaving behind that old approach. In today’s India, rapid efforts are underway to connect everyone with ‘Gati’ and ‘Pragati’. The Vande Bharat train is a big proof of this.

When there is a will, even the most difficult of goals can be achieved. We have seen how until 8 years ago, disappointment related to the Indian Railways was writ large. The people of the country had accepted that improvement in Indian Railways was impossible with sluggish speed, heaps of filth, complaints related to ticket booking and accidents occurring on a daily basis. Excuses regarding lack of budget were often cited in developing new infrastructure of the railways.

We decided to address this challenge with clear and honest intentions. This is also the mantra behind the transformation of Indian Railways in the last eight years. Today travelling in Indian Railways has become a pleasant experience. There are many railway stations in the country where one can see the picture of modern India. The initiatives that our government has started in the last 7-8 years are going to transform the Indian Railways in the next 7-8 years. Today there are Vistadome coaches and heritage trains to promote tourism. Kisan Rails were launched to take the produce of the farmers to far-flung markets. The work on the Special Freight Corridor for goods trains is going on at a fast pace. Metro network is expanding in more than two dozen new cities to improve public transport in the country. Rapid work is also underway on futuristic systems like Regional Rapid Transit System in the country.