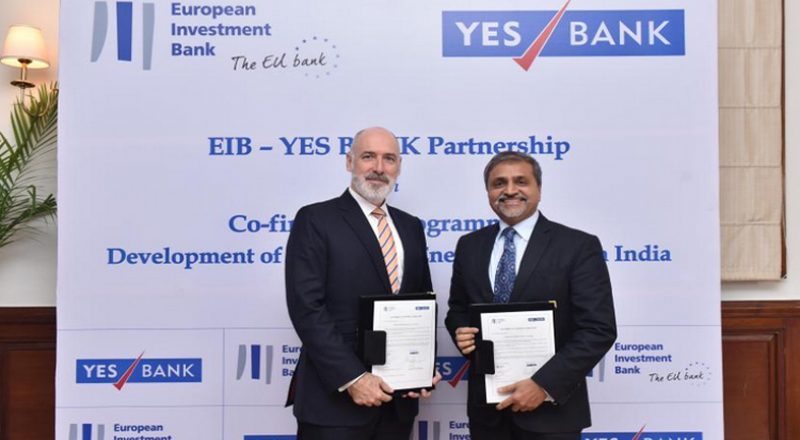 Expansion of renewable energy power generation across India will be supported by a new USD 400 million joint initiative backed by the European Investment Bank and YES BANK. YES BANK will manage the new co-financing programme for construction of new solar power plants and wind farms across the country.

The new USD 400 million private sector renewable energy financing programme was announced in New Delhi by Donal Cannon, Head of the European Investment Bank Representation to South Asia and Arun Agrawal, Group President, International Banking, YES BANK. It will be supported by USD 200 million from the European Investment Bank, alongside financing from YES BANK, project promoters and other financial institutions.

The 15 year USD 200 million EIB loan was approved by the EIB Board of Directors on 12th December and financial details of the new initiative are expected to be finalized in the coming weeks.

The new financing programme will streamline financing for a range of renewable energy projects being built and operated by leading Indian corporations and private sector developers. Eligible solar projects have already been identified in the states of Rajasthan, Telangana, Maharashtra and Karnataka and additional wind and solar projects are currently being examined.

“The new cooperation between YES BANK and the European Investment Bank, demonstrates another milestone in our leadership as India’s pre-eminent ‘Green Bank’. The highly successful transaction showcases continued trust and enthusiasm of Global multilaterals and Finance Institutions in partnering with YES BANK. With this transaction we remain well on track to achieve our commitment to finance 5,000 MW of RE made at the 1st RE-INVEST Summit in Feb 2015 and is also synchronous with our COP 21 commitment of mobilizing USD 5 Bn for Climate Finance by 2020,” said Rana Kapoor, Managing Director & CEO, YES BANK.

This new initiative is the first EIB cooperation with YES BANK, and represents the first support for renewable energy in Asia with a commercial bank. This is also the longest tenor borrowing facility for YES BANK in the international loan market. The European Investment Bank is the world’s largest international public bank, owned directly by the 28 European Union member states and the largest lender for renewable energy investment worldwide.

In recent months the EIB has made new investment in sustainable transport in India, backing expansion of the Bangalore and Lucknow Metro systems..