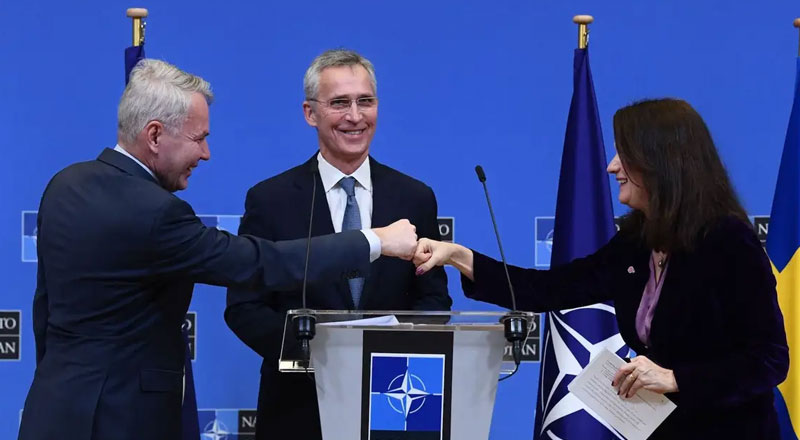 In a major change in Europe’s security landscape, Finland’s leaders Thursday have expressed their desire to apply to join the North Atlantic Treaty Organisation (NATO), and Sweden could do the same within days. This development comes in a historic realignment on the continent more than two months after Russian President Vladimir Putin’s invasion of Ukraine sent a shiver of fear through Moscow’s neighbours.

Finland’s president and prime minister announced that the Nordic country should apply right away for membership in NATO. While the country’s Parliament still has to weigh in, the announcement means Finland is all but certain to apply — and gain admission — though the process could take months to complete. Sweden, likewise, is considering putting itself under NATO’s protection.

Historically, Sweden has avoided military alliances for more than 200 years, while Finland adopted neutrality after its defeat by the Soviets in World War II. Public opinion in both nations shifted dramatically in favour of NATO membership after the invasion, which stirred fears in countries along Russia’s flank that they could be next.

NATO Secretary-General Jens Stoltenberg has said the alliance would welcome Finland and Sweden with open arms. NATO is the military defense pact founded in part to counter the Soviet Union.

The Kremlin reacted by warning it will be forced to take retaliatory “military-technical” steps. Such alliances would mean Russia will be left surrounded by NATO countries in the Baltic Sea and the Arctic and would amount to a stinging setback for Putin, who had hoped to divide and roll back NATO in Europe but is instead seeing the opposite happen.

Meanwhile, on the battleground, Russian forces pounded areas in central, northern and eastern Ukraine, including the last pocket of resistance in Mariupol, as part of its offensive to take the industrial Donbas region. Ukraine on the other hand recaptured some towns and villages in the northeast.

The first war-crimes trial of a Russian soldier since the start of the conflict is set to open Friday in Kyiv. A 21-year-old captured member of a tank unit is accused of shooting to death a civilian on a bicycle during the opening week of the war.