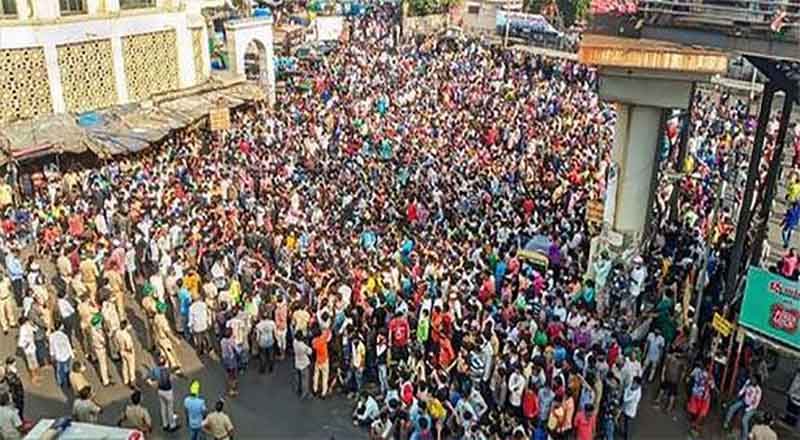 A huge crowd was seen at Mumbai’s Bandra station, which  had gathered there on a call of a man identified as Vinay Dubey. He was allegedly running a campaign online — ‘Chalo Ghar Ki Ore’ (Head towards home) for migrant labour in Mumbai. He has been accused of inciting migrants by posting calls for action on Facebook and Twitter.

The Mumbai Police has detained a man who may have potentially set off rumours that led to hundreds of migrants flooding the Bandra West area on Tuesday.

The police suspect his social media messages contributed to the protest by more than 1,000 migrant workers, most of them from Bihar, Uttar Pradesh and West Bengal, near suburban Bandra railway station.

A self-proclaimed labour leader, Dubey has several Facebook posts calling on the government to allow migrants to return home.

In a Facebook video, Vinay Dubey can be heard saying that if the government doesn’t provide migrants with adequate transport, he will set off on a rally on foot to take the migrants back to North India.

He repeatedly tells migrants that the option before them is to either “die where they are currently or go home and reunite with their families”. He can also be heard saying that his team is there in Bandra to lead the ‘movement’.

He had also tweeted about the issue and called for a national-level protest if trains are not arranged till April 18 to ferry migrants workers to their native places.

The Mumbai Police has filed an FIR against 800-1,000 people in Tuesday’s incident at the Bandra Police Station. The crowd has been accused of rioting.

The police are investigating whether there was intentional sabotage behind the incident as a huge crowd assembled in one place in a short time.

Hours after PM Modi’s announcement in a televised address to the nation on the last day of the lockdown, a large number of migrant workers rendered jobless came out on road in Mumbai, demanding transport arrangements to return to their native places.

According to a police official in Mumbai, the daily wage earners, numbering around 1,000, assembled at Bandra (West) bus depot near the railway station and squatted on the road for nearly two hours from 3 pm. Police had to resort to a lathicharge to disperse the crowd.