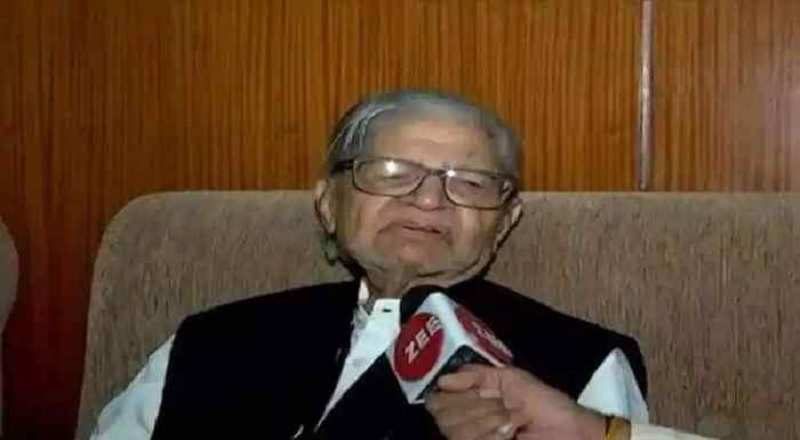 Former Gujarat Chief Minister and veteran Congress leader Madhavsinh Solanki passed away on Saturday morning at his residence in Gandhinagar. He was 93.

A four time CM of Gujarat, Solanki also served as External Affairs Minister in the PV Narasimha Rao Cabinet, engineered a socio-political shift in Gujarat politics during 1980s. An “architect” of KHAM (Kshatriya, Harijan, Adivasi, Muslim) coalition made the veteran Solanki rule the state as an “invincible” leader.

Success of KHAM eventually led to empowerment of unprivileged and backward classes, while it also caused alienation of upper castes from the political scene and triggered the caste-based alliances in the State.

He ensured a thumping majority for Congress in the State Assembly with 141 of the 182 seats in 1980 polls – a record in Gujarat’s political history. Solanki is also known for giving the Congress its biggest victory in the state in the 1985 election when Congress won 149 of 182 Assembly seats, a record that still hasn’t been broken.

As the news of political heavyweight spread, condolences messages began pouring in.

Prime Minister Narendra Modi expressed condolences on Twitter. “Shri Madhavsinh Solanki ji was a formidable leader, playing a key role in Gujarat politics for decades. He will be remembered for his rich service to society. Saddened by his demise. Spoke to his son, Bharat Solanki ji and expressed condolences. Om Shanti,” Modi wrote.

In his condolence message, PM also wrote, “Beyond politics, Shri Madhavsinh Solanki Ji enjoyed reading and was passionate about culture. Whenever I would meet him or speak to him, we would discuss books and he would tell me about a new book he recently read. I will always cherish the interactions we had.”

The Congress Party posted a condolence message on social media which read, “A leader known for inclusive development, four-time CM of Gujarat & former Cabinet Minister, Shri Madhavsinh Solanki’s compassion towards citizens & passion for their prosperity will inspire generations to come. We pay heartfelt condolences to his family at this time of grief.”

Gujarat Chief Minister Vijay Rupani too expressed his condolence to the family.